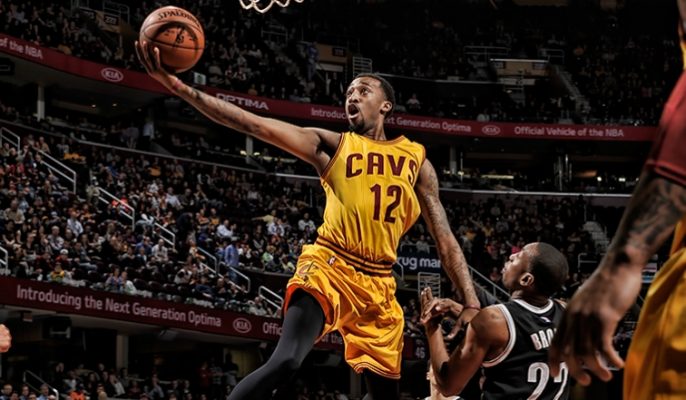 Each and every year in the NBA, there are a handful of players who make a leap in skill and have a breakout year.

Those players go from the depths of obscurity to the front pages of magazines and covers of video games.

This year, the Cleveland Cavaliers have one of those players poised for a breakout campaign in Jordan McRae.

McRae is a 25-year-old wing player who really began his breakout at the end of last season. Some Cavaliers fans may remember the final game of the 2015-16 season when McRae erupted for 36 points on 14-of-29 shooting while burying three 3-pointers against the Detroit Pistons.

And since that moment, McRae has done nothing but impress the Cavs’ management and roster.

Back in June, the Cavs exercised their team option on McRae for just under $1 million. It was proof that after he had shown an elite scoring ability and strong work ethic, the organization had completely invested in his development.

That commitment to McRae apparently had also extended down to the roster. According to Cleveland.com, LeBron James himself extended a special invite to McRae to come work out with some of the top players in the league over the summer, an invitation usually reserved for a different player with a higher profile.

“I got on the next flight out,” McRae told Cleveland.com. “I was just happy that I could go work out with LeBron.”

In his time in California at the UCLA Student Activities Center, McRae joined James, Dwyane Wade, Richard Jefferson and top draft pick Ben Simmons for a series of offseason workouts. Wade had even posted a photo of the group on Instagram.

Afterwards, James explained how he believes that it is his duty to help out McRae in his development and just how explosive of a scorer the 25-year-old can be.

“He took everything he learned from last year into summer league. We saw what he was able to do in summer league and we found out we were bringing him back so I just wanted him to continue to get better because he’s so talented. He’s an NBA scorer. He’s an NBA talent. He’s a great kid, too, so it’s my duty,” said James.

That summer-league performance that James referenced was something to behold for the Cavs. McRae earned himself a first-team nod after averaging 24.3 points per game, the third highest in Las Vegas.

But out of all the flashy performances and dynamic scoring ability that have been on display, the thing that has captured the most amount of attention from McRae has been his work ethic, and it’s the reason he is poised for a breakout season.

After the summer league, he joined James and company for several workouts. He also when to Miami to participate in a series of workouts with Kyrie Irving and Iman Shumpert, two guys who have been in the gym all summer long.

Even as some of his teammates were still celebrating last year’s NBA championship, McRae was back in the gym and in the weight room just one week after the parade.

“I was here all summer,” McRae said. “I didn’t really leave that much.”

And again, when he did leave, it was to join other teammates for workouts with some different scenery. Because of that, it’s given Cavs general manager David Griffin the opportunity to watch the former Tennessee Volunteer make major strides up close and even compare him to another dynamic scorer already in the NBA.

“He’s a great kid,” said Griffin. “He’s willing to do whatever you ask him to do. The veterans like him and the young guys like him. He’s got an endearing personality. He’s not somebody who thinks he has made it yet, but he has enough swagger to feel like he belongs. That’s important and important in our locker room because our guys can be merciless. I think he’s got the right blend of confidence and humility.

“I think of him as a player similar to a Jamal Crawford type.”

He’s 10 pounds heavier with muscle, he’s done nothing but workout with teammates all summer and entering his second season with the team, now has a full command of the playbook.

And with the preseason here, it’s all starting to pay off.

Just take a look at this dunk over Bismack Biyombo to get a taste of what is likely to be coming all season long.

McRae has scored 20 points in two different preseason games. He got to the free throw line 14 times in a third game and has shown that he can produce in limited minutes if need be.

“If Coach (Tyronn) Lue called his number he will be ready.”

McRae had better be ready, because it seems as though Lue will be calling his number a lot this season.