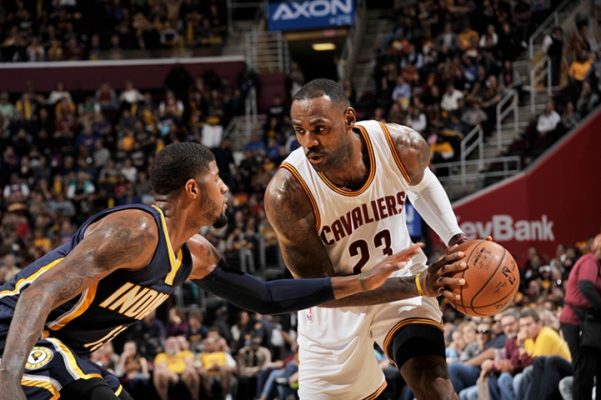 In professional sports, it’s common for teams to set their sights on the defending champs and come after their heads. For Indiana Pacers superstar forward Paul George, it’s a bit more personal for him in relation to LeBron James‘ reigning-champion Cleveland Cavaliers this upcoming season.

“Honestly, I look at us challenging them. I’ve been in the East and I’ve been number one with LeBron being on a team,” George said in a recent telephone interview, referring to when his Pacers had the best regular-season record in the Eastern Conference in 2013-14. “Really, what I’m looking at is it coming down to me getting us past the Conference Finals. I’m confident in myself. I’m confident in what I can do.”

George, who came back strong in a sixth man role for Team USA in the 2016 Rio Olympic Games, helped the United States win its third consecutive gold medal in men’s basketball.

Currently, the Pacers star forward has his sights set on making a lot of noise in the NBA this upcoming season. In order to do that, he acknowledged that he must put forth a complete effort and finally get the best of James.

“I’ve always matched up with him like, ‘I know he can do this, I know he can do that,’” George told Michael Lee of The Vertical. “Not in an awe fashion, but it’s more so, ‘I’m not supposed to win these games. This is supposed to be the best dude in the NBA. I’m trying to challenge him. I know what I’m up against.’ Now it’s, ‘I’m ready. I’m ready for you. I’m a veteran. I know you, you know me. Let’s meet here, let’s get this job done.’ I’m prepared. I’ve had time to figure this out. I’ve had time to lick my wounds. I’m ready.”

While training for the 2016 Summer Olympics, Cavs All-Star point guard Kyrie Irving said George had “an aura” about him that he hadn’t seen before. The point guard also mentioned that George seemed to conduct himself differently on the court and George agreed.

If this doesn’t get you pumped up for the upcoming 2016-17 NBA season, we don’t know what will. Get your popcorn ready.