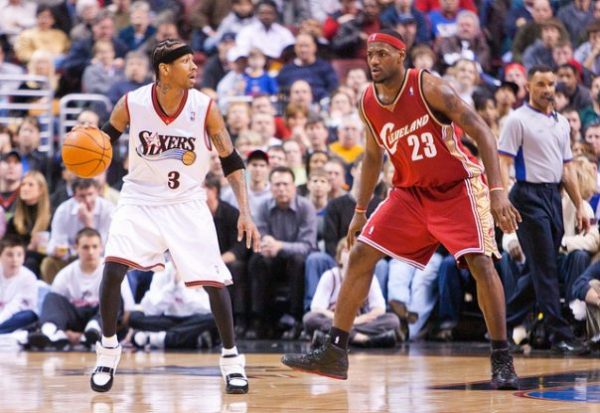 The opinions of retired Hall of Famers (and those soon-to-be) when it comes to assessing the talents of former and current NBA players always garner a certain level of interest. In the opinion of former Philadelphia 76ers guard Allen Iverson, his all-time NBA starting five includes the Cleveland Cavaliers’ very own LeBron James.

Iverson actually only named four specific individuals in a video interview with rap artist Jadakiss for the online series, “Livin Legends.” The basketball part of the nearly five-minute discussion only takes up a little over a minute at the beginning of the video, with the remainder of time spent on a variety of different topics.

Iverson’s list appears to indicate that he didn’t try and rate players he hadn’t faced on the court, which is the likely the reason that players like Bill Russell, Wilt Chamberlain and Kareem Abdul-Jabbar are omitted. Still, his quintet still rates as a Dream Team for the ages.

In addition to James, the list also includes Michael Jordan, Kobe Bryant and Shaquille O’Neal. The anonymous fifth player, in Iverson’s words, “could be a lot of dudes.” While James is the lone member of that foursome who’s still active, Iverson gives the interview while wearing a Jordan jersey.

When asked specifically about that fifth player, Iverson notes all current players, including the Cavaliers’ Kyrie Irving, Stephen Curry and Kevin Durant of Golden State, Russell Westbrook of Oklahoma City and Carmelo Anthony of New York. Iverson likened making such lists to those who attempt to rank rap artists, though his inclusion of Anthony is likely because he played with him in Denver during the latter stages of his playing career.

With respect to his ranking of James, Iverson’s final seven seasons in the NBA coincided with the first seven of James’ career, all of which were spent wearing a Cavs uniform. Since Iverson’s retirement, James has made six consecutive NBA Finals and has won Finals MVP accolades in the three in which his team has emerged victorious.