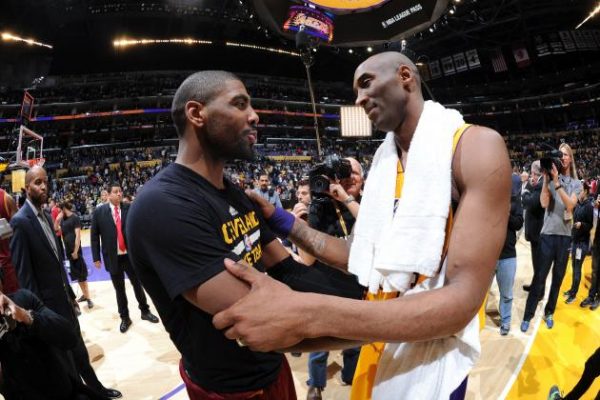 In the chaos that resulted immediately after the Cleveland Cavaliers won the NBA title last month, Kyrie Irving found time to bond with one of his mentors in Kobe Bryant via FaceTime.

Irving spoke to ThePostGame recently and indicated that just moments after hitting his game-winning three-pointer against the Golden State Warriors in Game 7, he spoke with the retiring Los Angeles Laker and future Hall of Famer.

“I actually FaceTimed Kobe after the game as soon as I got in the locker room,” Irving says. “Other than seeing my dad and my sister right after we won, FaceTiming him was just a great thing, knowing how he has won five and I just won my first. Then realizing how hard it is just to win one, my respect for him is already high, but it went to another level knowing that he’s got five of them. I’m trying to get a second one.”

The connection between Irving and Bryant had been made by Cavaliers assistant coach Phil Handy, who had previously served as the Los Angeles Lakers’ Director of Player Development.

“(Bryant) was telling me congrats,” Irving said. “I had been speaking to him throughout the entire playoffs and during the season. During the Finals, we didn’t really talk as much, because for me, I wanted to experience it full on, and if I needed his help, I would reach out to him. He would send me some texts here and there, but mainly he kind of let me be, and let me grow into my own space.”

While acknowledging the valuable advice received from Bryant, Irving didn’t forget to acknowledge the contributions of teammate LeBron James:

“There were times during my young career where I wanted to be the leader, but I didn’t really know how,” Irving said. “I understood that I had a lot of talent and did some great things out on the floor, and I brought a lot to the team, but there are a lot of intangibles that go unnoticed that can separate a good from a great team, or even a bad team from a good team. I was stuck in that place of being a young guy and finding out how to be selfless.

“There are so many intangibles, so many X’s and O’s that go on and off the floor that make a beautiful art piece, and that beautiful art piece ends with a championship. I now understand that, going through it, coming into a season hurt, getting hurt in the Finals, there are so many things that have happened that have really shaped me as a man over the last year, so I’m just really thankful that I’ve had him to lean on for guidance.”

Irving is now currently focused on competing in the upcoming Summer Olympics, with the United States’ first game taking place on August 6.