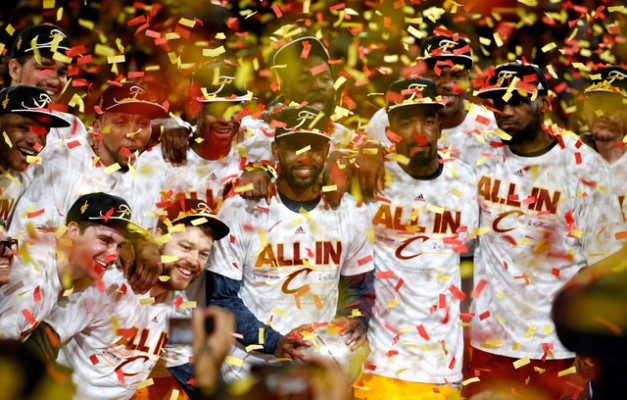 The Cleveland Cavaliers are the favorites to win the 2016 NBA Finals.

According to ESPN’s Summer Forecast, the Cavaliers will hoist the Larry O’Brien trophy in 2016. The ESPN panel was asked this time around which team would emerge as NBA champions next season, and the Cavaliers emerged as the clear-cut favorite with 119 total points.

The 2015 NBA champion Golden State Warriors, finished as runner-ups with 84 total points. Only five other teams were chosen to win the NBA Finals next season, with the San Antonio Spurs, Los Angeles Clippers and Oklahoma City Thunder rounding out the top five.

While the Cavaliers arguably have the most talented roster in the entire league, they will have to resist the temptation of getting caught up in their own hype. LeBron James knows all too well about that, having experienced it during his tenure with the Miami Heat from 2010 until 2014.

Cleveland might be without Kyrie Irving for the first few months of the season, and key role player Tristan Thompson remains an unsigned free agent less than a month before training camp begins.

Things are looking bright for the Cavaliers as they look to avenge last season’s Finals loss to the Warriors. While they may be the championship favorites on paper entering the season, they’ll have to actually prove it on the court.