Ayesha Curry Loses It After Seeing Photoshopped Images of Her Family 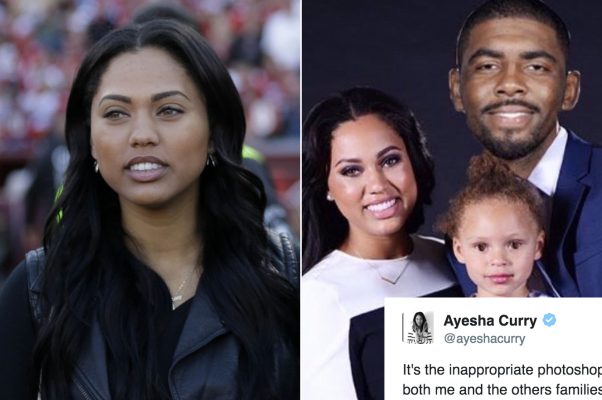 Both during and after the Cleveland Cavaliers’ historic comeback in the NBA Finals, some creative fans found a way to get under the skin of Ayesha Curry, the wife of Golden State Warriors point guard Stephen Curry. The weapon? Photoshopped memes of both Kyrie Irving and LeBron James in place of her husband.

Ayesha Curry fired the first volley in this mini-war by tweeting about a James comment on June 12 about taking the high road:

In Game 5, both James and Irving connected for 41 points apiece, which led to the first Irving meme:

Following the Warriors’ Game 6 loss, she posted and then quickly deleted a tweet about how officials’ calls during the game showed that the league was “rigged”:

The social media firestorm didn’t erupt again until after the Cavaliers won the NBA title in Game 7 on June 19. After James was named Finals MVP, his image was inserted into the meme, along with a few others mocking both Currys:

It took almost a full week, but the relentless mocking by Cleveland (and other basketball) fans, which included a t-shirt, finally resulted in a multi-tweet response from her:

It's the inappropriate photoshopped pictures that are insulting to both me and the others families, husbands, fathers, wives in them. 1/2

I could care less about "L's" keep sending them. At this point you guys are insulting both sides with the inappropriate photos.

Curry will have to wait a full year to try and get her revenge. In the meantime, she’s scheduled to have her own show on the Food Network at some point during that time.