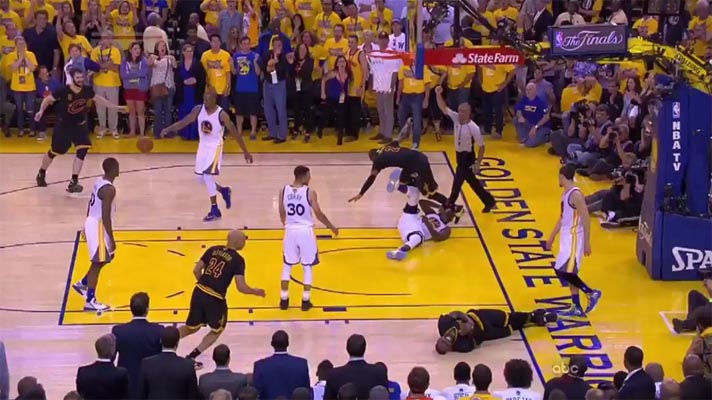 Draymond Green has a public relations problem when it comes to his reputation as a dirty player, or one who, at the very least, cannot control his body from flailing in every which direction.

And the reason he has a public relations problem is because he has an actual problem.

Yet another video has surfaced that shows Green’s leg flying into the air in the direction of Kyrie Irving. It happened very late in Game 7 when the Cleveland Cavaliers were holding a 92-89 lead over the Golden State Warriors. With just moments remaining, Irving finds LeBron James cutting down the lane for what could have possibly been a monstrous dunk if Green had not fouled James before he could reach the rim.

As Green falls to the ground, his leg flies up into the air and connects with what appears to be Irving’s hip and abdomen.

While this clip is clearly not as intentional as Green going after James’ privates in Game 4, this only adds to Green’s reputation as someone who simply cannot control his actions on the court.

The incident in Game 4 resulted in a suspension for Game 5, and many would argue that it was the moment that the series changed.

Of course, the Game 7 kick was not the only incident from the series with Irving, as Green appeared to kick Irving in the face/neck region during Game 1 as Green was coming off of a screen.

Draymond with another kick? https://t.co/0MFXvm2ZPW

That incident did not result in any action from the NBA, and it is highly likely that the NBA does not respond again due to the fact that the Game 7 incident seems unintentional, and because the Cavs were able to return to Cleveland with the Larry O’Brien Trophy.

After all, there’s no reason to kick a man when he’s down.