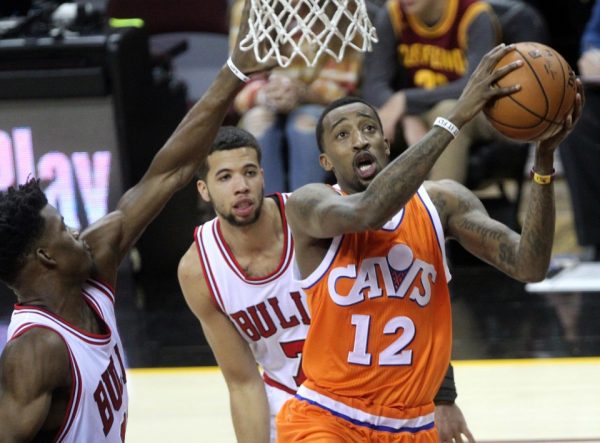 (Cleveland, OH) – A major comeback effort ended too soon for the shorthanded Cleveland Cavaliers as they dropped a 106-94 decision to the Chicago Bulls at Quicken Loans Arena on Wednesday night.

Playing without both Kyrie Irving and Kevin Love, the Cavaliers fell behind by 17 during the third quarter before going on a 29-13 run to get within a single point at 89-88 with 6:48 left. After the Bulls missed their next shot, the Cavs had a chance to take the lead, but LeBron James was called for charging with 6:25 left. Chicago then answered with an 11-2 run to put the game away.

“It wasn’t difficult to come back, but we didn’t make the plays to win the game,” James said. “This situation has slowed down our process, but with us, it’s always next man up.”

The Bulls’ Jimmy Butler was the main problem for the Cavaliers during that final quarter as the put up 14 points during the period.

“Down the stretch he (Butler) kind of took over,” Cleveland head coach Tyronn Lue said. “You kind of expect that from an All-Star.”

Irving continues to be bothered with a hamstring issue, while Love is still under the weather after a bout with food poisoning. To nearly make matters worse, Cleveland fans held their collective breath when James bumped knees with Chicago’s Michael Carter-Williams with 3:03 to play in the third quarter. Holding his knee, James left the game as the Cavs began their comeback, eventually returning during the fourth quarter.

“I didn’t know how much energy he (James) would have,” Lue said. “He looked pretty good for a guy who had been sick all day.”

James, who’s been battling the flu the last few days, led the Cavaliers with 31 points, eight rebounds and seven assists, while Jordan McRae added 21 points in a starting role. After the game, James spoke about his uncertain status due to the illness:

McRae spoke about the need for the team to ease the burden on James:

“LeBron’s carrying a heavy load, so we’re just trying to help him out,” McRae said. “We’re learning on the fly. It’s no excuse, we just have to figure it out.”

The only other Cleveland player to score in double figures was Channing Frye, who started in place of Love. He tallied 15 and grabbed five boards, while Tristan Thompson hauled down 11 rebounds, nine of them on the offensive glass. Rookie Kay Felder finished with nine points and played a key role in the comeback effort.

“I thought it was great that after missing his first five shots to bounce back and play the way he did,” Lue said of Felder’s performance. “He had a lot to do with that comeback. We were down 17, (he was) pushing the basketball, getting to the paint, scoring and making some good passes.”

The Cavaliers return to action on Friday night as they begin their longest road trip of the season. Game one will be in Brooklyn to face the Nets in a game that will tip off just after 7:30.