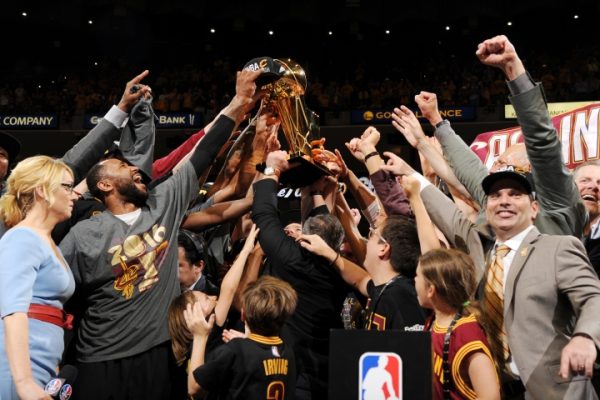 The wait is finally over.

Over fifty years of losing the last game of the season is over. There were torturous playoff losses, the Ted Stepien Era and “The Decision,” but now none of that matters.

The Cleveland Cavaliers are NBA champions.

Cleveland defeated the Golden State Warriors by a 93-89 final Sunday night in Oracle Arena in what is likely the most important Game 7 in NBA history.

“Cleveland! This is for you!” LeBron James exclaimed victoriously in his postgame interview.

James did absolutely everything that he could to end the 52-year championship drought in Cleveland, finishing the game with just the third Game 7 triple-double in NBA Finals history with a stat line of 27 points, 11 rebounds and 11 assists.

For his efforts, he was awarded the NBA Finals MVP, the third one of his career, and this time it was unanimous.

“We’ve been through so much adversity these last two years. I just knew what we were capable of, even being down 3-1 versus the greatest regular season team ever,” said James. “Everybody counted us out, and that’s when we strive the most. And that’s definitely when I strive the most.

“You see his basketball talent and the way he controls the game. He can take over a game and things like that. But the biggest thing for LeBron, the reason why he deserves this, is because he has a great heart,” said Cavs head coach Tyronn Lue. “He’s always giving, he’s given to everyone, and it’s not just about basketball. It’s about who he is as a person, and great things happen to great people.”

James’ second-in-command, Kyrie Irving, just like he’s done all playoffs long, drilled a seemingly impossible series of shots all night long, including a ridiculous step-back 3-pointer that gave the Cavs the lead for good with just 53 seconds left on the clock. Irving finished with 26 points and six rebounds in his 43 minutes.

“History was made tonight,” said Irving. “It was just about being resilient and taking care of business. But I mean, this is one for the books — literally.

“I’m glad all the X’s and O’s are done, and we can finally celebrate this championship.”

And just like a Game 7 is supposed to play out, with 20 lead changes and 11 ties, the contest was still in question with just minutes left to play.

After trailing 83-80, Stephen Curry and Klay Thompson drilled back-to-back jumpers to give the Warriors a 85-83 lead with just over six minutes left. That was followed up by a Draymond Green putback and suddenly the Warriors were up 87-83 with just 5:37 remaining.

But that’s when James put the Cavs on his shoulders by doing something that he is not known for — taking advantage of the 3-point line. First, he pump-faked Festus Ezeli into committing a foul behind the line, and knocked down all three free throws.

Then, with Ezeli guarding him again on the next possession, James buried a 3-pointer in the big man’s face giving Cleveland an 89-87 lead with just over four minutes remaining.

A Thompson layup on the other end tied up the game at 89-89, and that is where it would remain until the final minute of play. Both defenses went into lockdown mode over the final three minutes, but once again, the most impressive and important defensive play came from The King.

With just 1:50 left, Curry made a nice dish to Andre Iguodala on a fast break which looked as though it would give the Warriors a lead. But James made a soaring chase-down block on Iguodala to preserve the tie game and allow the Cavs an opportunity to take the final lead on the other end.

That’s when, a few possessions later, Irving drilled his stepback 3-pointer over the outstretched arms of Curry with 53 seconds left and allowed Cleveland to cruise to its first title.

James fittingly added the Cavs’ final point with a free throw, and almost immediately after the final buzzer James dropped to the floor and began to cry tears of joy, as he had accomplished the one goal he had always dreamt of.

James will now get on a plane and again return to Cleveland, but this time, Northeast Ohio’s native son is bringing the Larry O’Brien Trophy home with him.

“I’m home. I’m home. This is what I came back for. I’m at a loss for words. This is unbelievable,” said James. “I’m happy to be a part of history. I can’t wait to get back home and see you guys.”