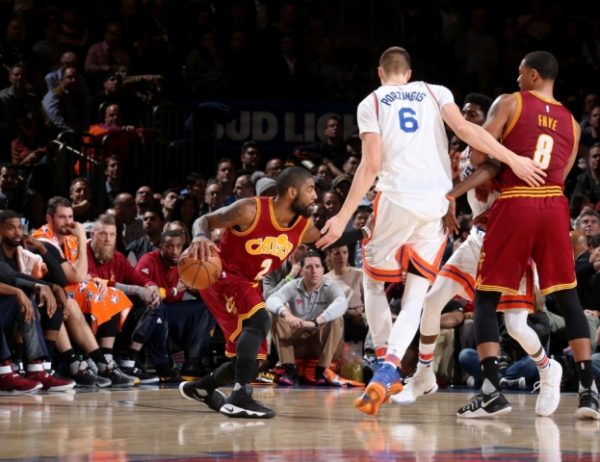 (New York, NY) – Leading from start to finish, the Cleveland Cavaliers closed out their three-game road trip on a high note with an easy 126-94 victory over the New York Knicks at Madison Square Garden on Wednesday night.

One key to the victory was the season-high 22 3-pointers the Cavs hit during the contest, connecting at a 55 percent rate.

The Cavaliers came out firing during the first quarter, twice leading by as many as 17 during the period. That last time came after a pair of Kyrie Irving free throws with 3:38 left in the quarter to make it 34-17.

The Knicks then closed out the quarter on a 9-2 run.

“We just wanted to come out with a concerted effort on both ends of the floor,” Irving said immediately after the game. “Just be consistent and demonstrative in our actions. Our pace was unbelievable.”

After the Cavs were able to boost the halftime margin to 15 points at 63-48, they ended any comeback hopes after the break by outscoring the Knicks, 31-17. During that third quarter, Cleveland led by as many as 30 at 87-57 with 2:47 left.

“If we’re going to be a great team, we have to dig deep on defense,”  Kevin Love said. “We preach that every game.”

While the Knicks held out Derrick Rose on the second night of a back-to-back, it made little difference as the Cavs’ defense held them to 39 percent shooting from the field and forced 12 turnovers for the first three quarters. By the end of the quarter, the Cavaliers held a commanding 92-65 advantage, allowing Cavs head coach Tyronn Lue to rest his starters during most of the fourth period.

“For the most part, the guys stuck to the game plan,” Lue said. “We’re doing a good job of protecting the paint, shrinking the floor.”

Cleveland’s Big 3 of LeBron James, Love and Irving combined for 74 points on the night. James finished with 25 points, seven assists and six rebounds, hit on 7-of-10 from the field and connected on 10-of-14 from the free throw line. Love did most of his damage of 21 points in the opening quarter, when he scored 16, courtesy of five 3-pointers. Meanwhile, Irving led all scorers on the night with 28 points, while adding six assists.

“Obviously, we shot well, but that was a byproduct of our defense,” James said. “When the ball is moving, it makes it a lot easier to just put it up and shoot.”

On the boards, Tristan Thompson was ferocious, ending the evening with 20 rebounds, including on the offensive glass, one off his career high. By comparison, the five Knicks starters had 19 boards on the night.

“When he’s (Thompson) cleaning glass like that, it allows us to get into our running game,” James said.

In place of the injured J.R. Smith, DeAndre Liggins got his first-ever start for the Cavs, connecting on a pair of 3-pointers and playing solid defense during his 20 minutes of action. Iman Shumpert was the only other Cleveland player to reach double figures, scoring 14 on four 3-pointers and a pair of free throws.

Speaking about Liggins’ defensive abilities, Irving was effusive with his praise:

The Cavaliers now head back to Quicken Loans Arena on Friday night to face the Miami Heat. Tipoff will be just after 7:30 p.m E/T.