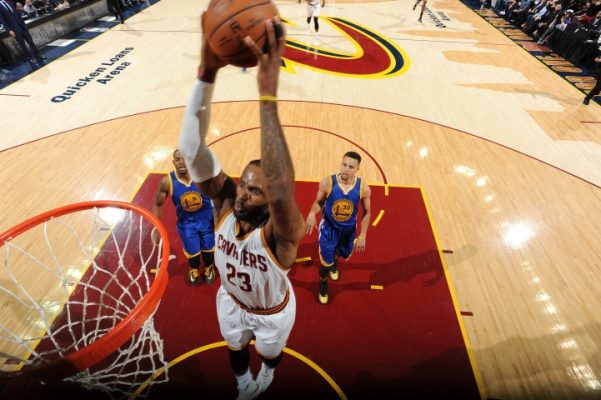 (Cleveland, OH) – Behind a near triple-double by LeBron James, the Cleveland Cavaliers forced a Game 7 in the NBA Finals with a 115-101 victory in Game 6 over the Golden State Warriors on Thursday night at Quicken Loans Arena.

James finished with 41 points, 11 assists and eight rebounds and helped the Cavaliers hold off a second-half comeback by Golden State. James was the only Cavalier to score during a 10-minute span that spanned the third and fourth quarters, with the 41 points marking the second-straight game that he’s reached that point total.

“I don’t think he got tired,” Cleveland head coach Tyronn Lue said. “He had another unbelievable game.”

Kyrie Irving finished with 23 points and four rebounds, with all but three of his points coming during the first half. Tristan Thompson also had a strong game with 15 points and 16 rebounds, while J.R. Smith was the only other Cavs player to score in double figures, finishing with 14 points.

“High energy, use my motor and be relentless on the glass,” Thompson said when asked how he approached the game.

Cleveland led from start to finish, although they avoided a disastrous second-half slide that saw them go from 24 points up with eight minutes left in the third quarter to just seven at the same point in the fourth period.

“Our antennas have to be up for 48 minutes,” James said. “Otherwise, that team will make you pay for it.”

Cleveland had seemingly put the game away, taking a 70-46 lead with just over four minutes gone in the second half. However, an 11-2 Warriors run whittled the margin down to 15. Then, after the Cavaliers had bumped the lead back up to 19 at 80-61 with just over three minutes to play in the quarter, the Warriors closed out the period by scoring the last 10 points and sliced the deficit to nine at 80-71 entering the final quarter.

Uncharacteristically, James stayed in the game to start the fourth quarter:

“I knew that those first couple of minutes were going to be important,” James said. “I didn’t want to let down my teammates.”

That would be as close as Golden State got and the game effectively ended with the Cavs leading 99-87 with 4:22 to go in the game. At that point, the Warriors’ Stephen Curry fouled out and then was officially ejected from the game after throwing his mouthpiece in protesting the call, the first ejection of his career.

“We know we can’t turn the ball over,” James remarked. “The fact that we only had 12 turnovers for 16 points was an important reason why we won.”

The win was keyed by the Cavaliers completely dominating play in the opening quarter, ending it with a 31-11 lead after hitting 57 percent of their shots and holding the Warriors to a meager 23 percent from the field. Golden State missed their first seven shots and didn’t score their first point until five minutes into the game. Their 11 points marked the fewest points in a quarter all season long.

The Warriors were able to chip away four points off the deficit during a rollercoaster second period, but still trailed 59-43 at intermission. At one point, they had sliced their deficit to just eight at 46-38 on nine unanswered points, but then watched the Cavs run off eight straight points of their own.

“We stuck with our game plan, being aggressive and attacking,” Lue said. “We kind of got away from that in the second quarter.”

Game 7 will tip off on Sunday night just after 8 p.m. ET at Oracle Arena.

“I’m going to give my teammates and coaches everything I’ve got in Game 7 and I’ll be satisfied with the result,” James said.