Photo: Fan Gets License Plate to Remind Everyone Warriors Blew 3-1 Lead in Finals 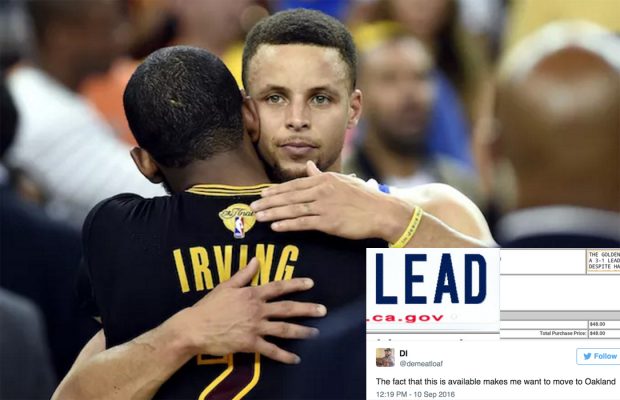 A Cleveland Cavaliers fan has decided to remind residents of California that the Golden State Warriors watched a 3-1 lead in the 2016 NBA Finals disappear, helping the Cavaliers achieve its first-ever NBA title.

Complex.com noted how the quick progression of the idea evolved after it was noted that purchasing a license plate with the alphanumeric combination “3 1LEAD” was possible.

The fact that this is available makes me want to move to Oakland pic.twitter.com/5OmDkuMSYG

That led Cavs fan Conrad Kaczmarek to first debate whether he should purchase it before then going ahead and actually doing it. The purchase price of the plate was $48, with a $40 renewal charge for subsequent years.

I don't live in Oakland but i could still do it… https://t.co/iHuftKzVkG

it's gonna be really great because it'll say 3 1 LEAD and be surrounded by this pic.twitter.com/iLwQxpk1YT

That motivated another individual named Prescott Rossi to do the same with a New York license plate.

No indication yet on whether any Ohio resident has decided to do the same within the Cavaliers’ home state.