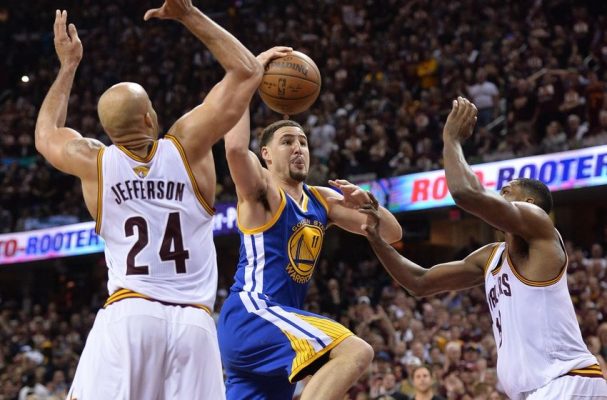 The NBA Finals have been going on for a couple of weeks now, but the most intense competition has not been between the four lines of the court, it’s been in a war of words in the press between the two teams.

As usual, the main target of the talk has been LeBron James, and every person from Skip Bayless to Antonio Davis has criticized James for one thing or another.

This time around, the criticisms have been for his role in a Game 4 scuffle with Draymond Green that resulted in a suspension for Green and a technical foul for James.

While criticisms from talking heads and former players who no longer have to face James is expected, the most noticeable complaints have been from Golden State Warriors guard Klay Thompson.

After the Game 4 incident, Thompson stated his displeasure with James’ role in the scuffle, indicating that he was unsure as to why James took the trash-talking personally, suggesting that James simply “got his feelings hurt,” and that basketball was a “man’s game.”

Of course, those comments came just days after Thompson called out Timofey Mozgov for setting what he deemed a dirty screen in Game 3.

If you think that complaining about a hard screen one day and then preaching about the fact that basketball is a man’s game just a few days later is contradictory, you are not alone.

While James himself has taken the high road, Cleveland Cavaliers big man Richard Jefferson feels no such obligation, taking the time to point out the inconsistencies in Thompson’s statements to The Vertical’s Chris Mannix.

“If it’s a man’s game, shut up about the (illegal screen),” said Jefferson. “Or don’t say anything about LeBron. Klay, he’s like my little brother. But we can’t contradict ourselves.”

Jefferson seems to have taken a bit of the high road himself, as the comments clearly could have been much harsher. But Jefferson was teammates with Thompson for a year and a half in Golden State, and it’s apparent that he still holds a decent amount of respect for the 26-year old.

Again, James didn’t respond verbally in the press conference, but he absolutely responded physically on the court in Game 5. James poured in 41 points, grabbed 16 rebounds and led the Cavaliers in nearly every statistical category in one of the most impressive performances of his career.

The Cavs will need two more of those performances from James if he and the rest of the team plan to bring home the Larry O’Brien Trophy to Cleveland. Game 6 is Thursday night with tipoff set for 9 p.m.