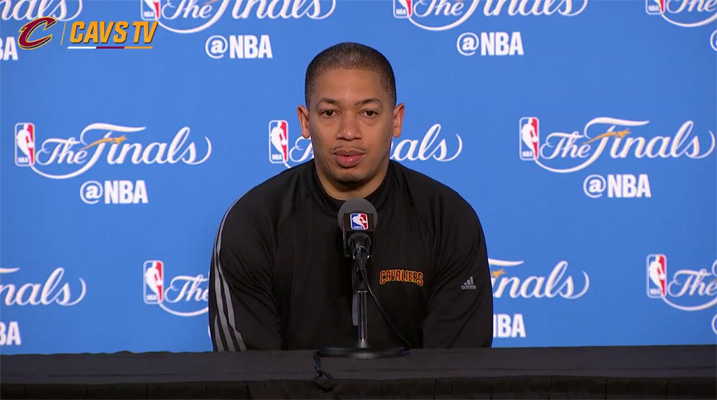 Sticking with what works looks to be the motto for Cleveland Cavaliers head coach Tyronn Lue as he strategizes to defeat the Golden State Warriors in the NBA Finals. That means he plans to match up with the Warriors’ fast-paced running style in order to give more transition opportunities to LeBron James and Kyrie Irving.

“We want to push the pace” Lue said. “You think I’m going to walk it down every time?”

The running philosophy is what Lue has been preaching to the team since he took over on January 22. While that approach had its ups and downs as it was implemented during the regular season, it’s been a huge success in the postseason as Cleveland has compiled a 12-2 record thus far.

“We just have to play our game,” Lue said. “We’re not going to slow the ball down and be at ease. We’re going to push the pace, try to get easy baskets early in transition but make sure we’re taking good shots.”

During last year’s finals, the Cavaliers had no other option than to slow things down due to the season-ending injuries to Irving and Kevin Love. That worked for a while until Golden State was able to counter it and win the last three games of the series. This year, the Cavs have some flexibility in this area.

Irving, whose shaky health last year finally collapsed with a fractured kneecap in Game 1 of the finals, is fully confident about Lue’s line of thinking.

“That’s our game,” Irving said. “Going in having confidence in the people we have and that pace that we play at and we play best when we play fast.”

While Cleveland no doubt would have preferred having home-court advantage in the series, Irving said the team isn’t intimidated by having to play the first two games on the Warriors’ home court.

“Being on that road, being tested, it’s what’s the playoffs are about. Getting that road win (against Toronto) and becoming Eastern Conference champions on that floor was a big deal,” Irving said.

Game 1 is set to get started just after 9 p.m. ET on Thursday night.