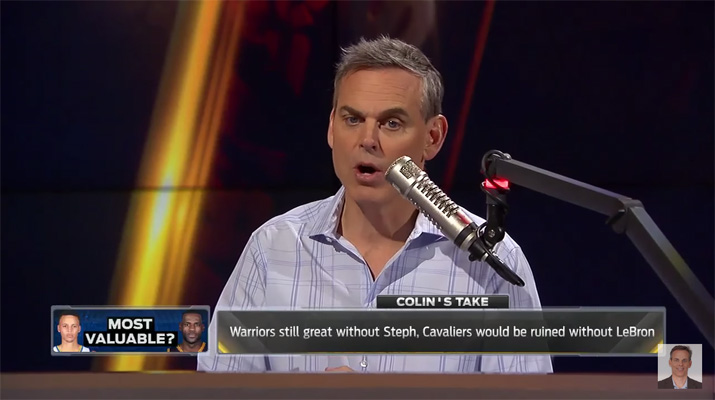 Ever since LeBron James re-ignited the debate about just what the word “valuable” means when awarding the NBA MVP, pundits and talking heads alike have all given their two cents on the debate of just what that word means when handing out the trophy.

And while plenty have argued that Steph Curry may not be the most “valuable” player in the league, the consensus has been that in 2016, he fully deserved the MVP Award.

Even James stated as much.

“I think he definitely deserved it,” James said after practice Wednesday. “You look at Steph’s numbers, he averaged 30 (points per game), he led the league in steals, he was 90-50-40 (from the free-throw line, the field and from behind the arc) and (the Warriors) won 73. So, I don’t have any debate over that, really, when it comes to that award.”

Only Colin Cowherd doesn’t agree. Cowherd Monday got on his radio show “The Herd” on Fox Sports and laid out the case as to why King James is the rightful owner of the throne.

He, much like the four-time MVP, brought up the usage of the word “valuable” when trying to determine who the MVP is. By Cowherd’s definition, James is still the most valuable player in the world.

“Cleveland this year is 1-5 without LeBron. 1-5 in the weaker Eastern Conference,” said Cowherd. “I’m not sure this league has ever had a single player as valuable as LeBron James.”

Tuesday it was announced that Curry would be the first unanimous MVP, and Cowherd got right back on the air to react.

“Draymond Green of the Warriors is having the greatest series (against the Portland Trail Blazers) that anybody not named LeBron has had in — 10 years,” said Cowherd during his radio show Tuesday. “Draymond Green hasn’t had a bad quarter, and unlike Steph, he’s there like a freight train, like LeBron, providing food to America every stinking minute.”

Then on Thursday, Cowherd continued to defend his position on his radio show, rattling off several statistics to further support his claim that “James has been the most valuable player in the league for a decade.”

“Without Steph Curry on the court (in the 2016 playoffs), the Warriors are plus-10.8, yet without Draymond Green on the court they are minus-10.7. Without LeBron on the court, Cleveland is minus-13.7,” said Cowherd. “Interesting that the unanimous MVP’s team is plus-10.8 without him on the floor.”

Cowherd raises some pretty compelling points, and like he articulated, it’s very difficult to argue that there is another player in the world more valuable to a franchise than James is.