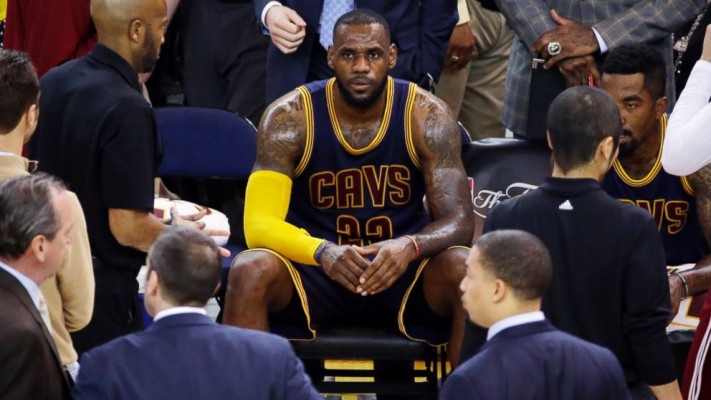 Entering Game 6, LeBron James and the Cleveland Cavaliers are down three games to two in the NBA Finals.

The Cavaliers are coming off of two consecutive disheartening losses to the Golden State Warriors and one would think the Warriors have all the momentum as the series shifts to Quicken Loans Arena for the final time.

Game 4 was an absolute demolition as Cleveland collapsed under relentless defensive pressure from the Warriors. In arguably LeBron’s only bad game of the series, James was held to just 20 points and failed to score in the fourth quarter as the Cavaliers lost by a score of 103-82.

Game 5 was a better story for James and the Cavs, as LeBron notched his second triple-double of the series with 40 points, 14 rebounds and 11 assists. It was all for naught however, as Steph Curry scored 17 points in the fourth quarter to push Golden State past Cleveland for a 3-2 series lead.

It is clear that the Warriors have a better team than the Cavs. The Cavaliers are down two All-Stars in Kevin Love and Kyrie Irving and are literally depending upon Timofey Mozgov and Matthew Dellavedova as the second and third best options on the team for this NBA Finals.

No offense to Mozgov and Dellavedova, but there isn’t a single squad in the NBA where they would be considered the team’s second and third-best options. For perspective’s sake, neither player was even drafted.

While one can critique James for his isolation tendencies and his ball dominance, it’s a miracle that Cleveland has even gotten this far in the series with players who wouldn’t be considered starters on most NBA teams. One needs to remember that Dellavedova is starting only because Irving is injured.

While Mozgov has been the team’s starting center since being acquired during the middle of the season, he was never considered much of a threat before his arrival in Cleveland—his career-high in points per game during a single season was 9.4 points.

Yet here we are, and the Cavs are literally a fourth-quarter collapse away (Game 1) from being up 3-2 in the championship series of the NBA.

While players like Mozgov and Dellavedova have had their moments, almost all of the credit for the Cavs’ success in this series belongs to none other than “The King.”

It’s not only that James is having by far the best series of any player between the two teams and deserves the Finals MVP, win or lose. He is having one of the greatest NBA Finals series of all time. It is so great that it might be the greatest Finals performance by an individual player ever. 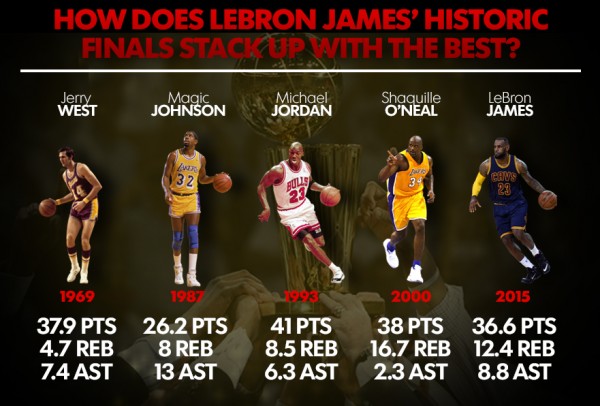 Words cannot summarize how dependent the Cavaliers are on James when it comes to initiating the offense. He has played all five positions in this series, something that has not been seen in an NBA Finals since Magic Johnson played for the Los Angeles Lakers. It’s not just that he’s so versatile when it pertains to position play—but he’s creating points for the Cavaliers either through his passing or own scoring on nearly every Cleveland possession.

Tony Manfred of Business Insider details how the Cavaliers’ offense runs through James:

“We’ve seen more efficient, successful performance in the Finals, but we haven’t seen a player completely take control of a team the way LeBron has. He’s the primary ball handler, post player, distributor, creator, and scorer. He’s responsible for everything Cleveland does on offense. If you go backwards from the moment the Cavs make any given basket, you’ll almost always find that LeBron was, in some way, the origin.”

To understand just how much of a one-man team the Cavaliers have been since Irving was sidelined following Game 1, get this—of Cleveland’s 91 points scored in Game 5, James either scored or assisted on 70 of those points. This is not even including “hockey assists” where LeBron was the individual who initiated the other points through his passing and ball-handling on the court.

Some more food for thought: James’ usage percentage in this series is at nearly 40 percent. The highest usage percentage over a single season is 38.7 percent, established by Kobe Bryant during the 2005-06 season.

The Warriors’ Draymond Green stated just how dominant of a player James is following Game 5:

“You’re not going to shut him down. If he gets 40, he gets 40. That’s why he’s LeBron James. You can throw a triple-team at him, and he’ll still probably get 40. As long as you make him work for those 40, you’ve got to be satisfied with what you do.”

Why is LeBron’s legacy even on the line here? Why is this even a question where James’ legacy can be negatively affected because of a Finals loss?

The Chicago Bulls great went 6-0 in the NBA Finals. As far as records go, he was flawless and perfect in the Finals.

James of course is already 2-3 in championship appearances. With this loss he would be 2-4. It would provide ammunition for James’ detractors that he would no longer have an argument for being the game’s best because of his losing record in the Finals.

And that is simply a narrow-minded way of looking at things. It’s completely wrong.

We live in a futuristic age of social media where not only athletes, but entertainers and everyone in general lives under great scrutiny. Whereas during Jordan’s time fans were looking for heroes to look up to and idolize, we now tear down those that are the best at what they do.

Tiger Woods went through it a few years ago due to his personal life misdeeds. Alex Rodriguez is currently going through it right now for being involved with steroids, although just about every great player from his era has admitted or been revealed to have using steroids at some point in time. Tom Brady, the reigning Super Bowl champion and Super Bowl MVP, is under intense scrutiny for his role in deflating footballs.

That’s just what is in these days. Perk up heroes from the past and tear down the current ones for whatever reason you can conjure up.

There is no taking away from Jordan’s perfect record in the Finals, but keep in mind he had a top 50 player of all time in Scottie Pippen for all six of those appearances. For the first three, he had one of the game’s best rebounders and an All-Star in Horace Grant. For the last three championships, he had Dennis Rodman, arguably the greatest rebounding big man in the modern era.

Are we forgetting all of those early exit playoff defeats that Jordan suffered throughout the 80’s? Is it less impressive that LeBron has suffered four Finals defeats as opposed to Jordan who did not even advance to his first NBA Finals until age 28 in his seventh season?

By age 30, LeBron has already advanced to six Finals. He has been a part of the past five Finals series, something Jordan didn’t even accomplish.

This isn’t to demonstrate that LeBron is on Jordan’s level or anything of that nature. This is simply to point out just how special of a player we’re witnessing in James. People often get lost in a player’s greatness when they are so zoned in on comparing Player A to Player B. It just so happens that Jordan is considered the best in NBA history, and James is this generation’s best.

What James is currently doing in the 2015 NBA Finals has never been seen before. It isn’t far-fetched to say that his supporting cast may be the worst in NBA Finals history. Outside of Mozgov and Dellavedova, his top rotation players are Tristan Thompson, Iman Shumpert and J.R. Smith.

Thompson is having a great series considering his role (13.0 rebounds per game) but Shumpert and Smith have been extremely inefficient. Despite being a starter, Shumpert is averaging just 6.2 PPG on 27 percent shooting. Smith has been the definition of inconsistent, with a 10 PPG average on 31 percent from the field and 26 percent from beyond the arc.

According to Nate Silver, the 2015 Cavaliers are the third-worst team of the past 62 NBA Finals teams. The only two that were worse? The 1999 New York Knicks and the 2007 Cavaliers, another Finals team LeBron was a part of.

If LeBron is a part of yet another losing Finals squad, there is little doubt the talking heads will find a way to put down James for suffering a fourth Finals defeat.

The bottom line is this: what James has accomplished in this Finals series is something worth remembering. It’s something that has never been seen before and likely won’t be seen again any time soon.

If the Cavaliers lose in Game 6 or Game 7, this series will not and should not do any damage at all to LeBron’s legacy—it should only add to it.