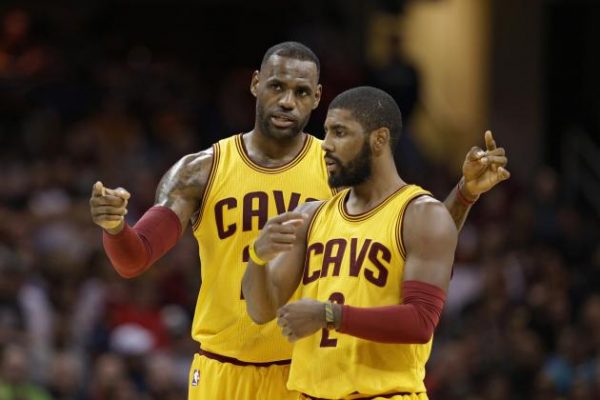 While Kyrie Irving has a long way to go before he reaches the status of a player like Dwyane Wade, that doesn’t mean there aren’t clear similarities between the two.

Although Irving is 10 years younger than Wade, LeBron James—who has played with both players—believes that both players thrive in pressure situations, via Joe Vardon of Cleveland.com:

“I mean, they’re both special in their own right. Obviously Wade is a little older and has experienced a little bit more but as far as the fourth quarter, they both thrive on that in their life. They love the pressure situation and are not afraid to take the shot or if they miss a shot they’re not afraid to take the blame either. So I’ve been fortunate to play with two great guys.”

Although Wade clearly has the upper hand when it comes to experience due to his three championships, the 24-year-old point guard has arguably proven to be the Cleveland Cavaliers‘ best player this postseason.

Through two playoff series, the point guard leads the Cavaliers in scoring with 24.4 points per game. James is second with 23.5 points per contest.

Furthermore, Irving ranks sixth in the NBA in fourth-quarter scoring with 6.4 points per contest. Wade ranks seventh (6.3), while James ranks eighth with 6.1 points per fourth quarter.

While the two situations are vastly different considering Wade is the clear No. 1 option in Miami and James is considered the true go-to option in Cleveland, Irving’s ability to put the Cavs on his back during the fourth quarter of this year’s postseason has been monumental.

If Irving can continue his stellar fourth-quarter play in the playoffs, there is no reason to believe the Cavaliers can’t win a championship in 2016.