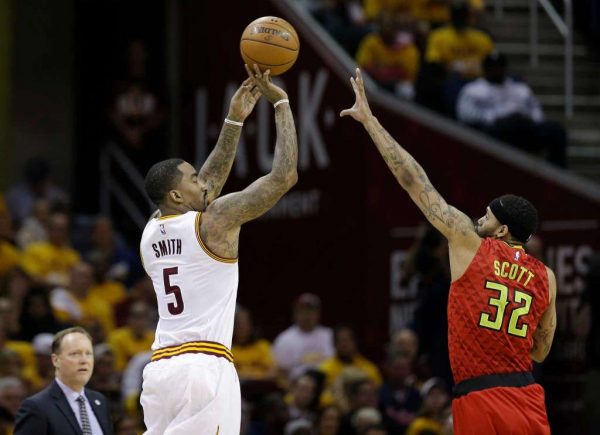 The eagerness of Cleveland Cavaliers guard J.R. Smith to put up any kind of shot is something that the team welcomes, with LeBron James joking after Wednesday night’s blowout win that Smith didn’t have just a green light to shoot, but an ultra-green one.

That approach, according to Brian Windhorst of ESPN.com, has resulted in Smith actually being more comfortable with a defender on him.

“I’d rather take a contested shot than an open shot any day,” Smith said. “It’s kind of boring when you take open shots.”

In that unique category, Smith is currently atop the list among NBA players for making contested three-pointers with 19, one ahead of the Golden State’s Klay Thompson. Smith has launched a total of 61 three-point attempts during this postseason, with only 22 of them taken with no one around. The other 39 efforts have resulted in 49-percent shooting, a lofty level for this segment.

“Whenever I shoot the ball, I have the confidence that it’s going to go in, and I attribute that to how hard we work in the gym,” Smith commented. “I feel as if I can make it. And when I get that opportunity, I’m going to shoot it, and I’m going to make it.”

That confidence never waned during last year’s NBA Finals, when Smith connected on just 29 percent of his three-pointers against Golden State. Despite the fact that he was equally torrid last year during Cleveland’s first three rounds at 48 percent, the feeling is that history won’t repeat itself should the Cavaliers get that far this year. That’s because last year, the Warriors could afford to focus on Smith more often after Kyrie Irving’s season-ending injury in Game 1.

“Guys are always looking at me like: ‘What are you doing? What are you doing?’ This is my shot,” Smith said. “Regardless of how funny it may look to you, I feel as if I can make it when I get that opportunity.”

James is certainly behind his teammate’s unorthodox method, saying that he’s a born shooter:

“This guy, you give him the ball anywhere, he can shoot it,” James said. “All shapes and sizes, he doesn’t have to be balanced.”