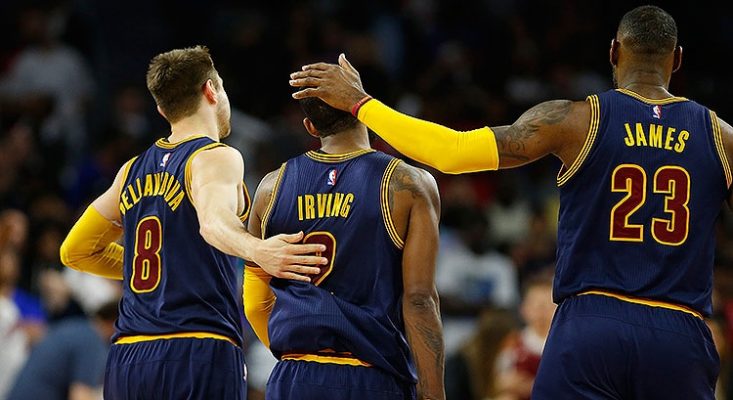 (Detroit, MI) – A clutch three-pointer and some tight defense by Kyrie Irving in the final minute of play helped the Cleveland Cavaliers complete a four-game sweep in their first-round playoff series against the Detroit Pistons, winning Game 4 by a score of 100-98 on Sunday night at The Palace of Auburn Hills.

Irving connected on a three with 42.6 seconds left, then harassed Detroit’s Reggie Jackson in the closing seconds as Jackson attempted to drive down the court. The Piston guard’s desperation three-pointer came up short and sent the Cavs to the Eastern Conference semifinals, where they’ll meet either the Atlanta Hawks or Boston Celtics. That series is currently tied at two games apiece.

Irving spoke about those closing seconds immediately after the game:

“I just tried to press him at half court and tried to make it hard for him.”

“From my standpoint, I could see that the shot was going to be short,” James remarked. “Kyrie stayed on him and made him take an off-balanced shot.”

The three-pointer by Irving marked the second game in a row in which he hit a crucial long-range shot and was his second trey in as many quarters that had jolted the Pistons. In the waning seconds of the third period, he launched a bomb from half court that swished to give the Cavs the lead back at 81-78.

Another important three came from J.R. Smith, whose 35-foot bomb with 4:51 left had given Cleveland a 95-86 advantage.

“I thought it was a total team effort,” Cavaliers head coach Tyronn Lue said after the game. “We weathered the storm.”

Irving led all scorers with 31 points and added five assists. Both James and Kevin Love finished with double-doubles as James hit for 22, hauled down 11 boards and handed out six assists. Love tallied 11 and grabbed 13 boards, wiping out a disastrous first half that saw him hit on just 1-of-10 from the field.

“The fact that he (Irving) was in such a groove this series that we could ride his coattails, I could focus on other things like my individual matchup,” continued James.

Other Cavs in double figures were Smith with 15 points—all coming on three-pointers, while Matthew Dellavedova added 11.

“When Kyrie plays downhill, plays with confidence, he’s almost impossible to stop,” Love said afterwards. “He had a lot of big shots for us throughout these four games and that’s just the type of player he is. We’re happy he’s healthy, we’re happy he’s with us.”

The Cavs will now likely have at least a week to rest up, since the Hawks-Celtics matchup won’t end until Thursday at the earliest and could extend into next weekend. Therefore, the Cavaliers aren’t likely to play until Saturday or Sunday, though the date is still to be determined.

“We were able to get hit and keep moving forward,” Lue said. “We’ve been harping on that all season. Not to drop our head, not to have bad body language when teams have runs, and this series we got down a lot. We just kept pushing, kept moving forward and that’s the biggest growth of this team right now. Staying with it and not giving in when things get tough.”