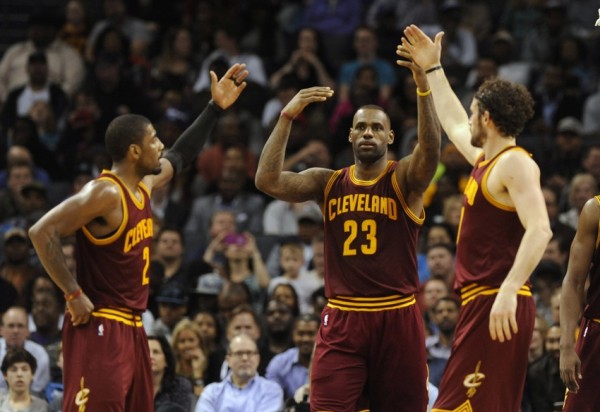 Basketball is a science. And for almost any problem presented on the court, there is an equation to give you the solution.

So three pioneers have their knowledge and talent come together at the perfect moment and accomplish the greatest possible achievement?

It sounds familiar because we’ve been witnessing just that with the Cleveland Cavaliers in the NBA Playoffs thus far. LeBron James has been doing LeBron James things. Kyrie Irving has been drilling impossible shots and coming through in the clutch. And Kevin Love has provided a consistent hand on offense while pulling down a ton of boards.

The Cavs’ Big 3 is starting coming together at the perfect time.

The Detroit Pistons just proved that they are one of the most dangerous young teams in the entire league, and they gave the Cavs four real tests to start the playoffs. But the Big 3 showed just how good they can be when everything comes together.

Love showed up with a double-double in all four games of the sweep. And he did this while sharing the court with one of the league’s best rebounders in Andre Drummond. Up until Game 4, he was shooting 47 percent from the field and and 44 percent from behind the arc. But the thing that impressed most was how he responded when his shooting was off in Game 4. Love was just 3-of-15 from the floor and 1-of-5 from behind the arc, but he found a ton of other ways to get involved.

He hustled for loose balls, threw dimes on outlet passes and was always there to help up his teammates. Despite the discouraging shooting night, Love was anything but discouraged. He even gave the Cavs a huge extra possession in the fourth quarter after a scrap with Stanley Johnson.

Love found several different ways to contribute, and his shooting is almost guaranteed to return to the mean in the next series.

Irving, meanwhile, has been flat-out unstoppable on the offensive side of the ball. Reggie Jackson, Kentavious Caldwell-Pope and any other Piston who squared off against Irving was simply ill-equipped to handle the situation. Irving has scored 110 points in four games on 47.1-percent shooting from both the floor and behind the arc.

Uncle Drew will tell it to you himself, the game is about getting buckets. Irving has gotten his at the most crucial times for his team, including back-to-back games with a dagger 3-pointer in the final minute of the game.

Even Jackson had to give it up in the postgame.

“There’s guys in the league like that,” said Jackson. “They get paid to fill it up. When they get going, they’re tough to stop.”

Irving seems to be built for the postseason, and if he continues to play like this, the Cavs will likely be hosting a parade this June.

James is in playoff mode, and that’s basically all there is to it. But there is something just a little different about this playoff version of James from years previous.

The secret about King James is that his style of play is perfectly suited to be the ultimate fill-the-gap player. He was was meant to dominate every facet of the game so that his team is up and the game-winner is a technically a half-court buzzer-beater to end the third quarter.

“With our team it’s never about who the leading scorer is,” said James after Game 4. “We just want to get wins.”

With Love and Irving as the other two parts of this Big 3, the four-time MVP finally gets to play the game the way he’s always wanted. James is currently averaging 22.8 points, 9.0 rebounds and 6.8 assists, and those numbers will most likely improve once he can operate in the post without the presence of Drummond.

It’s well within the realm of possibility that the two-time champ could average a triple-double in one of these upcoming series.

Irving gets the buckets, Love cleans up the misses and James does everything in between.

It may not be the theory of relativity, but an equation like this may finally bring the Larry O’Brien Trophy to the Cavs.

And in Cleveland, that situation has more gravity.