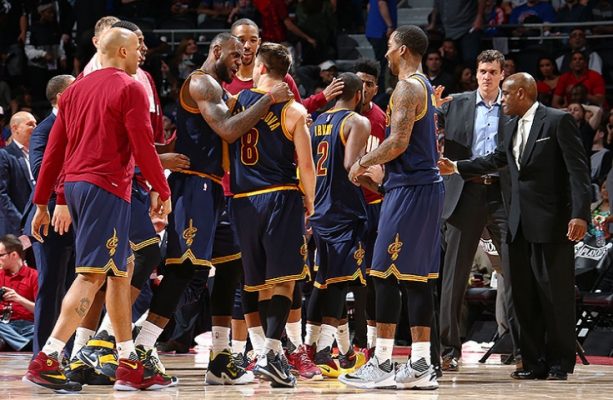 What made Irving’s basket even more clutch was that it came on an inbounds pass with just .07 left on the shot clock. The victory now puts Cleveland just one game away from advancing to the Eastern Conference semifinals.

“I thought it was a great play drawn up by T. Lue (Tyronn Lue),” Irving said about his huge basket. “We don’t necessarily panic in those situations and luckily, I got the shot off and it went in.”

Earlier in the quarter, the Cavs led 87-78 with 8:16 left in the game, but within two minutes, Detroit ran off eight unanswered points to cut the margin to a single point. Then, after Cleveland scored five unanswered points of their own, the Pistons got within a basket to make it 92-90 with just under four minutes left.

J.R. Smith provided some breathing room on a corner three-pointer with 3:30 left, but the Pistons’ Reggie Jackson had a chance to make it a one-possession game with 1:08 left. However, he stumbled en route to the basket, committing a crucial turnover that led to Irving’s lethal blow.

“I thought defensively, he (Irving) was great, he was locked in,” Tyronn Lue said afterwards. “I thought he was real precise at what he wanted to do and where he wanted to go on the court and go with the basketball, and he also made some great passes and great plays. Outside of the big three he made, I just thought he played under control and was aggressive attacking the basket and also making the right plays.”

Once again, second-half defense proved to be a key difference in the game for the Cavs. During the first half, Detroit connected on 60 percent of their shots from the field, but cooled off to just 38 percent in the final two periods.

Irving led all scorers with 26 points, and combined with the other two members of the Big Three, LeBron James and Kevin Love, to score a collective 66 on the night. James and Love both ended the evening with double-doubles, with James scoring 20 and grabbing 13 rebounds and Love also scoring 20, while hauling down 12 boards. James also contributed a team-high seven assists.

“I think we’re all in a great flow as far as the three of us. We understand what we all want, we understand what we want individually and what will help the team,” James said. “Guys are picking their spots, we’re going to Kev a lot in the post. We want him to continue to be aggressive and put pressure on the defense and we want Kyrie to be aggressive on pick-and-rolls. When he’s able to get his shot, we want him to take it.”

Love remains focused on staying aggressive, despite the presence of double-teams:

“For me I have to continue to be aggressive. These two guys (James and Irving) have been constant on me about that,” Love commented. “My job was to face up and see what they were going to give me and make a play.”

Tristan Thompson nearly joined Love and James in the double-double category with eight points and 10 rebounds. Eight of those boards came from the offensive side.

“I thought Tristan was unbelievable,” Lue commented after the game. “We decided to stay big tonight and he was phenomenal for us.”

Rounding out the offense, Matthew Dellavedova came off the bench to finish in double figures with 12 points and five assists, while Smith also came close to a double-double with nine points and nine rebounds.

“I think our preparation is a lot better than last year,” Irving said. “We know what to expect and we execute the game plan.”

The Cavaliers will go for the sweep on Sunday night in Detroit. Tipoff for the nationally televised clash on TNT will take place just after 8:30 p.m. ET.