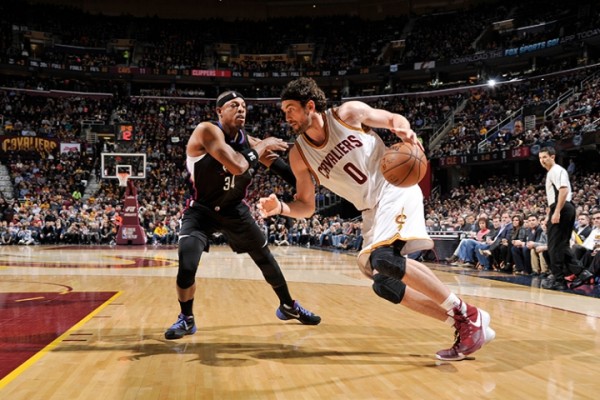 (Cleveland, OH) — Holding off a determined fourth quarter comeback by their opponent, the Cleveland Cavaliers came away with a 115-102 victory over the Los Angeles Clippers at Quicken Loans Arena on Thursday night.

Cleveland led 88-72 entering the fourth quarter, but over the first six minutes of the final period, Los Angeles chopped the margin to just six and had the opportunity to make it a one-possession game. However, Chris Paul was called for traveling, and the Cavs answered with an 11-1 run to salt the game away.

All five members of the starting lineup scored in double figures for the Cavs, who improved their record to 30-11 on the season. The loss cools off a Clippers team that came into the game having won 11 of their last 12.

LeBron James and J.R. Smith each had a team-high 22 points, with James collecting a double-double by adding 12 assists and Smith drilling six three-pointers. Kyrie Irving added 21 points and four assists, while Kevin Love also finished with a strong double-double on 18 points and 16 rebounds.

“That was another All-Star performance by Kevin, and he’s been doing it all year.”

The remaining double-figure scorer for Cleveland was center Timofey Mozgov, who finished with 11 points and five rebounds on the night. Meanwhile, Tristan Thompson came close to notching his own double-double with eight points and 12 rebounds.

James spoke about the team’s focus being key to the victory:

“We came out with a desperation mentality and we got the stops when we needed it.”

The Cavaliers had strong ball movement throughout the game, getting assists on 29 of their 42 field goals and hovered at or above the 50 percent mark during the entire contest.

Eight lead changes and two ties marked play in an opening period marked by solid shooting for both clubs. In the second period, the teams cooled off, particularly Los Angeles, who made just 30 percent of their field goals during those 12 minutes.

After the break, Cleveland was able to sustain a comfortable lead before expanding on it with a 12-3 run in the final three minutes of the third quarter. Their defense during that stretch primarily consisted of fouling Clippers center DeAndre Jordan, a notoriously poor foul shooter. Veteran reserve James Jones was used in that capacity, picking up four fouls as part of his 11 minutes of action. That strategy resulted in Jordan making just 3-of-8 from the foul line over that time frame and gave the Cavs a 88-72 lead.

James refused to dismiss the strategy as promoting bad basketball:

Blatt was asked about whether the rule should be eliminated:

Such comments were mild in comparison to pregame remarks that Blatt made in response to the national perception of the team after their blowout loss to the Golden State Warriors on Monday night:

“I think this team has done pretty well dealing with the adversity that we’ve had. I think this team is in pretty good position, although people choose to overlook that, which I don’t think is fair,” said Blatt. “We didn’t get here right now by being a bad team or by having all these problems that suddenly surface when you have a bad game like we have.

Thursday’s contest marked the first game in a four-game homestand, with eight of the next 11 contests taking place at Quicken Loans Arena. The next game will see the Cavaliers host the Chicago Bulls in a Saturday night contest, which will tip off shortly after 8:30 p.m. The special time is because this contest will be the first in a series of prime time matchups shown nationally on ABC.