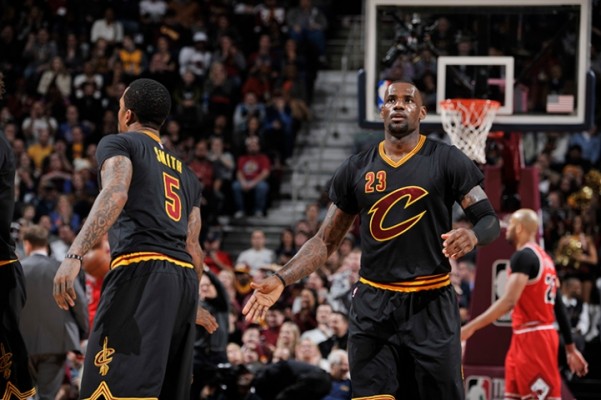 (Cleveland, OH) – Leading for nearly the entire game, the Cleveland Cavaliers started the second half of the season on a positive note with a 106-95 victory over the Chicago Bulls at Quicken Loans Arena on Thursday night.

With the exception of the opening moments of the game, Cleveland led throughout for their fourth consecutive win, including double-digit advantages for most of the final three quarters. The Bulls, who dropped their fifth straight contest, have been handicapped of late, due to injuries to Joakim Noah, Jimmy Butler and Nikola Mirotic.

LeBron James had a team-high 25 points, one of five Cavaliers players to score in double figures. He also came close to another triple-double by grabbing nine boards and handing out nine assists. The duo of Kevin Love and Tristan Thompson each collected a double-double: Love scored 15 points and hauled down 15 rebounds, while Thompson finished with 16 points and 10 rebounds. Meanwhile, Kyrie Irving added 19 points and four assists, and off the bench, Timofey Mozgov added 11 points, six rebounds and four blocks.

Love briefly addressed the fact that his name was allegedly part of trade talks over the past few weeks, directing his comments primarily at the media:

“The fact is you guys are stuck with me,” Love said.

The Cavaliers’ offense showed good ball movement during the first half, collecting 13 assists on their 21 field goals, finishing the game with 21 on 42 baskets in that category. Until the final 4:24 of the first half, their defense also shone by being able to hold the Bulls to just 29 percent shooting from the field.

During the second quarter, Cleveland used a 15-3 run to take their biggest lead of the half at 43-26. However, Chicago went on 16-5 run of their own at that point, connecting on seven of their last 10 field goals, including a buzzer beater, to only trail 48-42 at intermission.

Much like the second period, the Cavs used a 17-6 run in the third to again take a 17-point lead at 65-48. This time, however, the closest the Bulls would get for the remainder of the game would be 11 at 75-64 with just under a minute remaining in the quarter. With 1:53 left in the contest, Cleveland led by 19 before Chicago scored the final eight points of the game.

Cleveland head coach Tyronn Lue spoke about how the team’s physical approach during the game was a key difference:

“I thought our physicality won the game tonight,” Lue said. “I thought we were physical at every position.”

The Cavaliers return to action on Sunday afternoon as they travel for what figures to be a tough battle against the Oklahoma City Thunder in a nationally televised 3:30 p.m. ET clash. Back on December 17, the Cavs defeated the Thunder in Cleveland by a score of 104-100.