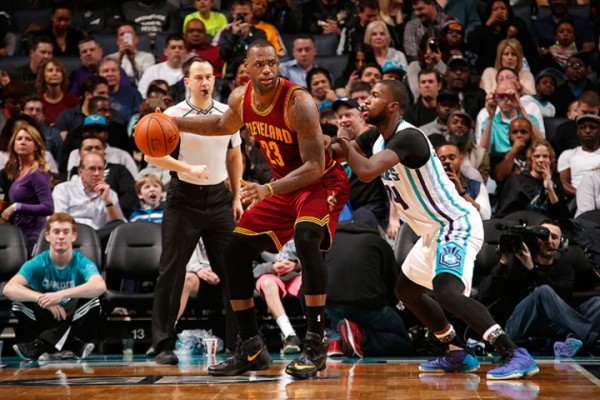 (Charlotte, NC) – The combination of another second-half stumble coupled with getting dominated in the rebounding column proved to be disastrous for the Cleveland Cavaliers as their five-game winning streak came to an end in a 106-97 loss to the Charlotte Hornets at Time Warner Cable Arena on Wednesday night.

The Cavaliers had led 58-49 at intermission, closing things out with a 15-2 run and shooting 67 percent from the field during the second quarter. However, all of that quickly faded as they were outscored 33-17 in the third, including a 21-7 run by Charlotte over a seven-minute span.

Things got no better in the fourth quarter, with the Cavs falling behind by as many as 15 before staging a brief comeback that chopped their deficit to six with 2:44 left. They scored nine unanswered points that made it 98-92 in favor of Charlotte, but that surge ended when the Hornets’ Jeremy Lin hit a pair of free throws and quickly followed up with basket. Lin also tallied 11 during the Cavaliers’ third quarter slump.

Throughout the contest, the Hornets dominated the boards, ending the night with a huge 49-28 advantage, including an 11-3 spread on the offensive boards. One of the usual stalwarts for the Cavaliers in this department, Tristan Thompson, was virtually invisible during the game, managing just four points and four rebounds.

“They were crashing on us and we weren’t able to stop it,” Lue said. “We can’t depend on the bigs all the time.”

Lue was also asked about the near-comeback:

“We got desperate and we wanted to play harder,” Lue said. “But once they took a lead, it was hard for us to come back from it.”

Sloppy play was also a problem in the second half, with Cleveland having been spotless in the first half with no turnovers. However, after returning to the court, they committed seven turnovers and shot just 30 percent from the field up to the start of the ill-fated comeback. Three of those turnovers came in just over two minutes at the outset of the final quarter.

Lue spoke about the second-half woes:

“That’s the third game in a row that we’ve struggled in the second half,” Lue said. “We’ve got to do something to address that situation.”

“Last year, it was the first quarter where we were getting killed, and now it’s our third quarter,” James said. “That’s the second game in a row that we gave up 30 or more and that’s just not going to cut it.”

Kyrie Irving led all scorers with 26 points and also had five assists, while James added 23 points, six rebounds and six assists. Other Cavs scoring in double figures were J.R. Smith, who added 14 and four steals, and Kevin Love, who racked up a double-double with 12 points and 12 rebounds.

Irving sought to pinpoint the continuing second-half problem, but acknowledged the main issue on the night:

“I just think we have to come out of halftime with an aggressive mindset,” Irving said. “They outfought us and we didn’t match their physicality.”

Meanwhile, James spoke of the need to address the team’s lack of consistency:

The Cavaliers return home for a pair of weekend contests, beginning Friday night with a 7:30 p.m. ET matchup against the Boston Celtics. That will be followed 24 hours later by a matchup against the New Orleans Hornets that will also tip off at approximately the same time.