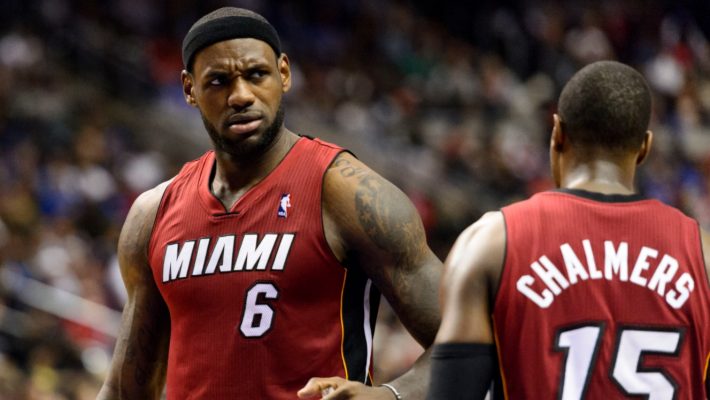 That fact that Cleveland Cavaliers point guard Kyrie Irving reportedly asked for a trade from the team because he was being overshadowed by LeBron James begs the question as to what it’s like to be teammate of James. One former teammate of James who offered his opinion on the subject recently was veteran guard Mario Chalmers.

Chalmers, who played with James when both were members of the Miami Heat, spoke about the issue during an appearance on Sirius XM’s NBA radio show “Off the Dribble” on Thursday:

“It can be tough (playing with LeBron) sometimes just because he’s such a dominant player,” Chalmers said. “He’s the best player in the NBA, so it boils down to the coach. Is the coach going to get everybody else involved, or is he gonna let ‘Bron decide when he wants to get everybody else involved? That’s one of the things we were going back-and-forth with [in] Miami. But as a teammate — he’s a great teammate. I’ve never had any problems (with him), even when we had that one argument on the court. At the end of the day, we’re still brothers. We were over that after it had already happened, and the media made it more than what it was.

“I can’t say he’s a bad teammate. He’s a great teammate, a great dude. And when you’re a guy like Kyrie, and you’re young and you’re ‘the man,’ I can see him wanting to be traded to be on his own team, but I don’t think it’s as personal as what everybody is trying to make it seem.”

The 31-year-old Chalmers, who missed all of the 2016-17 season while recovering from a torn Achilles tendon, recently re-signed with the Memphis Grizzlies, who he was playing for at the time of the injury. He played with James during all four of the latter’s seasons with the Heat. Miami made it to the NBA Finals each year, and during both the 2011-12 and 2012-13 seasons, the franchise won the NBA title.