Don't Miss
Home / Media / Dan Gilbert Speaks on LeBron James: ‘It All Revolves Around the Sun, Which Is Him’

Dan Gilbert Speaks on LeBron James: ‘It All Revolves Around the Sun, Which Is Him’ 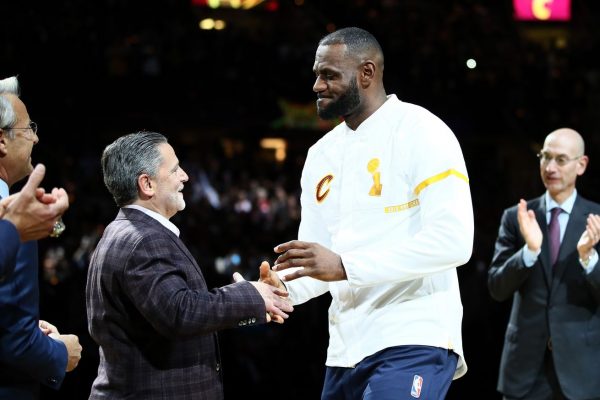 Throughout LeBron James’ tenure on the Cleveland Cavaliers, the star player and team owner Dan Gilbert never seemed to see eye to eye.

Of course, there was the infamous open letter that Gilbert sent to James when he departed for the Miami Heat in 2010. On the other side, there were many times where  James seemed to seek much more control than the typical player is afforded.

Upon James’ return to Cleveland in 2014, it often seemed as though the two were somewhat at odds, all while leading one of the most successful teams in the NBA during that time.

Now, Gilbert has come forward to shed some light on what it’s like to own the team that just so happens to feature basketball’s most famous player.

He spoke with Terry Pluto of Cleveland.com about his former star player.

“With LeBron, there was a limited shelf life in terms of his age and his contract commitment,” said Gilbert. “It’s a win now at all costs. . . It all revolves around the sun, which is him.”

He added that all the pressure of having James on the team was worth it thanks to the 2016 NBA championship.

“Whatever pressure comes with it, it worked out,” he said. “We won a title.”

Finally, Gilbert spoke on James’ second departure from the Cavs. He said that unlike 2010, he and the front office were more prepared.

“Unless someone has at least verbally committed, you had to assume that could happen,” said Gilbert. “We were better prepared this time around.”