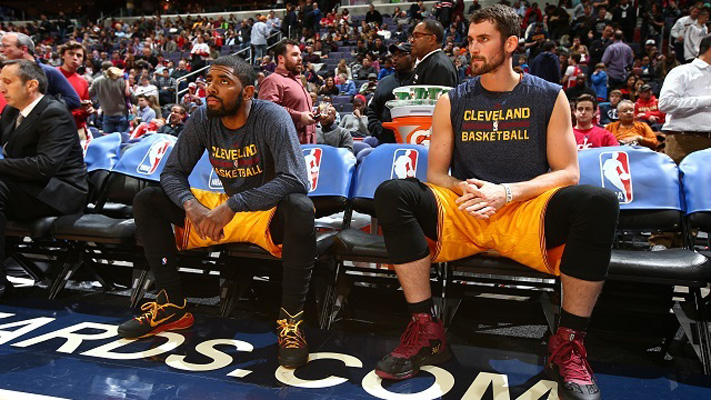 Picking up the pieces from a disastrous night, LeBron James noted that the relative playoff inexperience of the Cleveland Cavaliers is a detriment when the team faces adversity like it did in the team’s blowout loss to the Golden State Warriors.

James, who scored just 16 points on the evening, sought to make sense of the Cavaliers’ worst loss of the season:

“We’ve got some inexperienced guys that haven’t played enough meaningful basketball games where they can fall back on,” said James. “When it gets a little tough sometimes, it’s not like they can kind of fall back on previous experiences to try and help them get through it.”

While not specifically pinpointing Kyrie Irving and Kevin Love, the fact is that neither has had postseason experience prior to last season. Even then, Love saw action in only four playoff games before suffering a season-ending shoulder injury and Irving was hobbled for much of the postseason with various ailments until a fractured kneecap in Game 1 of the NBA Finals officially ended his season.

Against the Warriors on Monday night, Irving and Love combined for just 11 points and were 4-of-16 from the field. Meanwhile their counterparts, Stephen Curry and Draymond Green combined for 51 points on the night.

A frustrated Love indicated that some soul-searching by the entire team was in order:

“It’s going to take a lot of guys looking themselves in the mirror and it all starts with our leader over there (James) and dwindles on down,” said Love.

James believes that the Cavaliers’ success, both this season and last, along with the image of them being the team to beat in the Eastern Conference, has given some of the younger players a false sense of security, saying it was the worst thing possible.

Two members of the backcourt who see plenty of time on the court, Iman Shumpert and Matthew Dellavedova, are both 25, but both got that invaluable experience last season and combined for 21 points last night.

Still, age isn’t a litmus test for experience and maturity, since J.R. Smith again displayed both lack of focus and discipline before and during the game. Smith supposedly reached Quicken Loans Arena less than an hour before tipoff and then was ejected in the third quarter for a hard foul on Golden State’s Harrison Barnes. The latter concern will likely result in another suspension, given Smith’s past history.

James put Golden State, San Antonio and Chicago in the category of teams that are battle tested. Against those teams this season, Cleveland now sports a record of 0-4, though all but the latter game against the Warriors were close contests.

While the defeat on Monday stings because the Cavaliers were never really in it, James chalked it up to being a painful learning experience:

“We’re going to have a lot of bumps, and that’s OK,” James said. “We’ll learn from it and get better from it, but the best teacher in life is experience, and it’s good to go through it.”

Cavs head coach David Blatt sought to take the blame for the loss by saying that he hadn’t properly prepared the team. That would have allowed Cleveland to handle what quickly became an unstoppable onslaught by the Warriors.

However, James offered a simple response to Blatt’s attempt at shielding the players:

“Tonight was an example of how far we’ve got to go to get to a championship level,” said James. “The game plan was the game plan. We didn’t execute it.”