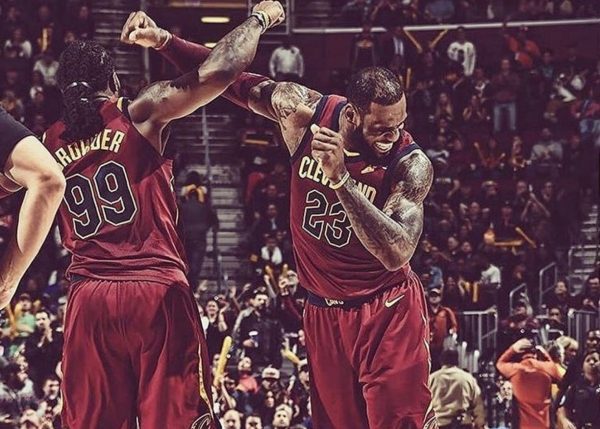 The first few months of Jae Crowder‘s time in a Cleveland Cavaliers uniform have seen him struggle to find a place within the team’s talented corps of players. On Saturday night, Crowder offered evidence that he’s emerging as a valuable part of lineup, helping deliver the kill shot in the Cavaliers’ 105-98 comeback win over the Philadelphia 76ers.

Crowder took to social media on Sunday to acknowledge the support of LeBron James, who collected an assist on that clinching shot and has helped him maintain his confidence in the face of that slow start.

Due to teammate injuries and different lineup combinations, the 27-year-old Crowder has frequently seen his position change in the team’s first 27 games. That’s resulted in season numbers that have him averaging 8.5 points and 3.2 rebounds per game.

However, his scoring has become especially significant when he’s been able to reach double-figures, since the Cavaliers have a spotless 11-0 mark when he reaches or breaks that threshold.

When he was acquired in the Kyrie Irving deal in August, Crowder was considered a supplemental part of the deal that delivered Isaiah Thomas as Irving’s replacement. However, due to rehabilitation from a hip injury, Thomas has yet to play a game for the Cavs, adding pressure on Crowder to produce.

Crowder will be further aided up front when Tristan Thompson returns from a calf inury that’s sidelined him for the last 19 games.

The reference to Crowder’s mother is a poignant tribute to the woman who died on the day Crowder was dealt to Cleveland.