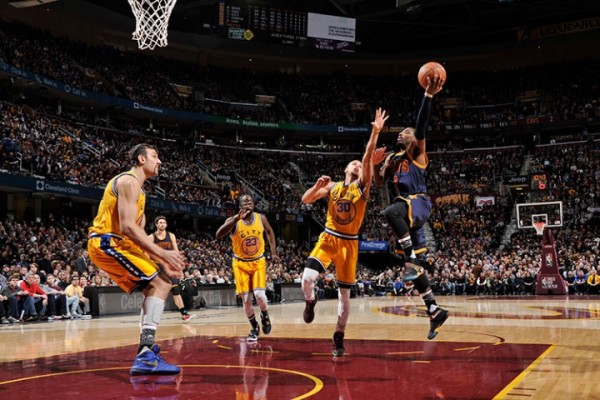 The lopsided defeat not only marked the worst loss of the season for the Cavaliers, but the worst home loss of LeBron James‘ career with the Cavaliers.

Stephen Curry scored 16 points on 4-of-6 shooting from beyond the arc in the first quarter alone and finished with a game-high 35 points on 12-of-18 from the field while sitting out the entire fourth quarter. Draymond Green complimented the Warriors’ attack, as he notched a double-double with 16 points and 10 rebounds.

James posted just 16 points, five rebounds and five assists, all below his season averages. He didn’t receive much help as J.R. Smith (14 points) and Matthew Dellavedova (11 points) were the only two other Cavaliers to score in double figures.

In this 2015 NBA Finals rematch, the contest was almost over from the beginning. The Warriors jumped out to a 10-2 lead and ended the first quarter leading 34-21. They didn’t trail a single time during the game.

The game was so out of hand that the Cavaliers trailed by as many as 43 points on several occasions during the second half. Cleveland trailed 70-44 at halftime, which is the largest halftime deficit a James-led team has faced during his career with the Cavaliers.

Monday night’s victory over the Cavaliers also means the Warriors have swept the season series with their Eastern Conference rival. Golden State had defeated Cleveland 89-83 on Christmas Day. The Cavaliers have now lost five straight games to Golden State after losing the final three games of the 2015 NBA Finals series.

Prior to the game, Warriors sharpshooter Curry had made a controversial comment regarding his team’s first return to Cleveland since winning the 2015 NBA Finals:

In spite of the remarks, the Cavaliers didn’t seem all that motivated on Martin Luther King, Jr. Day.

To say that it was a blowout is an understatement. The Warriors converted on 19 three-point attempts and rolled on all cylinders as their starters sat out the entire fourth quarter. As much as Cleveland’s starting lineup tried to will the team back into the game all the way until the end of the third quarter, they couldn’t inch closer than a 28-point deficit.

Following the game, head coach David Blatt didn’t have much of an explanation for his team’s performance:

“I can’t sit here with an honest heart and tell you anything to explain the result. We got beat down.”

In spite of his team’s impressive win, Warriors interim head coach Luke Walton stressed that the Cavaliers will bounce back from this loss:

“He’s (LeBron James) not going to let these guys get intimidated. That was their first game back from a long trip…We were just on top of our game.”

The Cavaliers were so flustered that Smith ended up getting ejected early in the third quarter over a flagrant-2 foul when he aggressively battled through a screen set by a Warriors player.

Cleveland will try to get back on a winning track when they go back on the road to play the Brooklyn Nets at Barclays Arena on Wednesday night at 7:30 PM EST. The game will be broadcast locally on FSN Ohio.