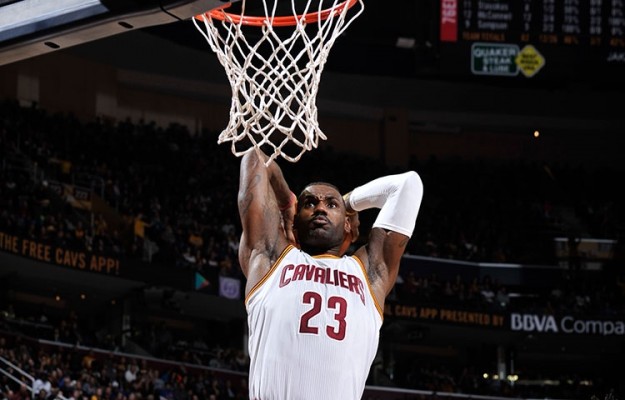 (Cleveland, OH) – An 18-point explosion in the third quarter by LeBron James helped ignite what had been a sluggish Cleveland Cavaliers squad to a 108-102 victory over the Philadelphia 76ers at Quicken Loans Arena on Friday night.

James drilled seven of his 10 shot attempts during that third period, contributing a trio of threes and also converting a three-point play. He and Kevin Love each contributed a double-double on the night, with James finishing with 31 points and 13 assists, and Love notching 12 points and 14 boards.

In addition to his effort on the night, James reached another milestone, becoming only the 20th player in NBA history, and fifth active player, to collect 9,000 field goals. The threshold was broken during the first half on a dunk.

“He came into camp in really good shape,” said Blatt. “We then sat him down for those 10 days, but what we’re seeing now is what he looked like at the start of camp.”

Love was asked about James’ effort, as well as his presence on the court and how it affects other teams:

“It’s what he does, he leads by example,” Love said. “He sucks in the defense in getting double and triple-teamed, and it helps everyone else.”

Four other players finished in double figures on the scoring ledger for the Cavaliers, led by Richard Jefferson with 17. Tristan Thompson ended the night with 11 rebounds, while Mo Williams contributed 16 points and eight assists.

Blatt commented about the team’s uneven performance on the defensive side of the ball:

“We did not have our best defensive game,” Blatt said. “We didn’t finish any quarter well. I thought we were careless with the ball at the end of every quarter.”

Cleveland had trailed, 50-49, when the two teams returned following intermission, but a 28-10 run by the Cavaliers put them in control of the game and helped them raise their record to 5-1 on the young season, while the winless Sixers dropped to 0-5.

However, even after the Cavs took a 79-62 lead with 3:27 left in that third quarter, the feisty 76ers battled back with an 11-2 run that was capped by a three at the buzzer to chop the Cleveland advantage at 81-73. After Philly had sliced the margin to just five at 84-79, James once again played a key role with a three-point play. From there, the Sixers never got any closer than the six-point final margin.

For those final two quarters, the Cavaliers shot 56 percent from the field, an effort that helped them keep the determined Philadelphia squad at bay.

That effort was needed following an inconsistent first half that saw the Cavaliers hold multiple 10-point leads, only to watch the Sixers charge back within a few points.

In order to use Jefferson off the bench, free agent Jared Cunningham started at guard for the Cavs, and though he was scoreless on the night, Blatt was satisfied with his effort:

“We gave him a defensive assignment and he executed it 80-90 percent of the time,” Blatt said.

The Cavaliers showed good first-half ball movement, but both teams had their problems when it came to turnovers, combining for 24 in that category, including 13 from the Cavaliers. At the end, Cleveland finished with 29 assists and had just four turnovers after the break.

Jefferson noted how improved the Sixers are, and commented about the fact that he played 29 minutes in the contest, due to the injuries in the backcourt:

“They’re better than they were last year. We didn’t play a very good game,” said Jefferson. “I feel good. I’m used to playing 25-30 minutes a game.”

A scary moment for James, the Cavs and their fans came early in the fourth quarter on a drive to the basket, when he tumbled to the ground and was slow to get up. However, he stayed in the game, with Blatt saying that James had sustained a knee to his thigh.

“We let him go until it stiffened up,” Blatt said. “We didn’t want to put him back in unless we absolutely had to.”

James himself was cautious about his availability for Sunday’s game against the Indiana Pacers:

“The leg is still sore and it’ll probably be that way tomorrow,” said James. “I hope I don’t have to miss a game.”

In other injury news, Thompson left the game in the first half after sustaining a cut near his eye that required three stitches, but he chalked up the injury as the price for competing in the paint:

“As a big man if you don’t get any wounds, you’re not playing hard enough,” Thompson said.

That home matchup against the Pacers on Sunday afternoon will tip-off set just after 3:30 p.m. ET.