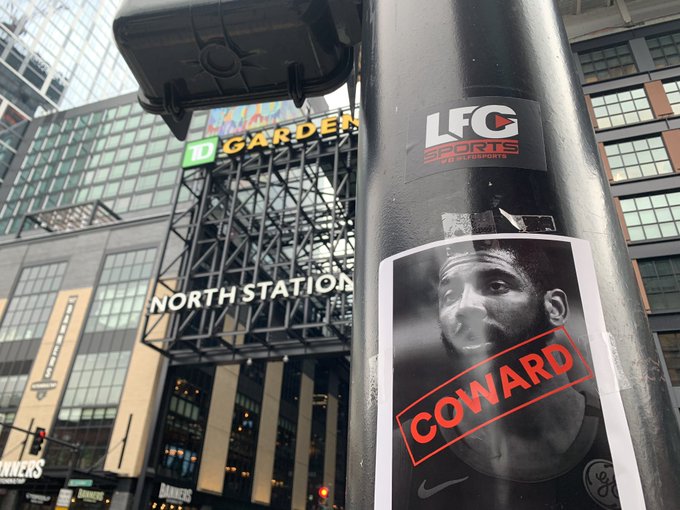 With Kyrie Irving not taking the court in Wednesday night’s game in Boston’s TD Garden, at least one offended fan of the Boston Celtics decided to post a sign outside of the arena branding Irving a “coward.”

Currently out the front of TD Garden: pic.twitter.com/dVKuCOu0rT

In truth, the former point guard for the Cleveland Cavaliers has missed the six games prior to this contest for the Brooklyn Nets because of a shoulder injury. The game would been Irving’s first trip to his former home, but that first visit may have to wait until the the next time the Nets play in Boston. That game will take place on March 3.

Irving’s first six seasons were spent with the Cavaliers, but a trade demand following the 2016-17 season ended up with his trade to the Celtics. He appeared to be happy in his new surroundings, though his first season with the team ended with him being unable to compete in the postseason due to injury.

Prior to the start of last season, Irving had publicly indicated that he would be open to signing a contract extension with the Celtics. However, he eventually backtracked from that apparent pledge during the year, a season which saw the Celtics defeated in the Eastern Conference semifinals in five games. Once free agency began, Irving quickly signed with the Nets.

The Cavaliers and their fans base are quite familiar with this current situation, though Irving did play in his first scheduled game in Cleveland after being traded. The problem is that Irving has not played a game in the city since, most recently the Monday night game between the Nets and Cavs at Rocket Mortgage FieldHouse. He’s also indicated that games against the Cavaliers mean nothing.