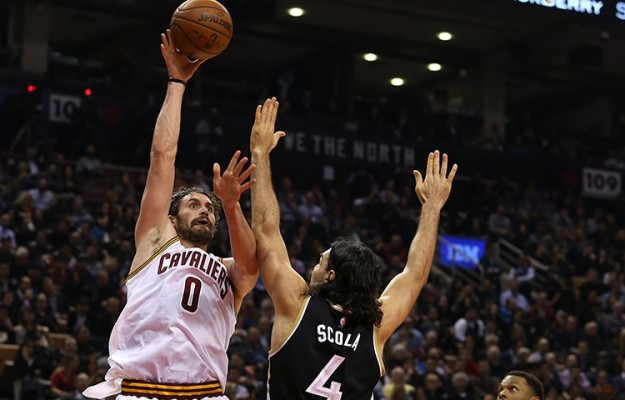 (Toronto, ON) – Another deadly fourth-quarter cold spell was disastrous for the Cleveland Cavaliers as they dropped a 103-99 road decision to the Toronto Raptors at the Air Canada Centre on Wednesday night.

The Cavaliers’ first basket of the final quarter came in the opening minute on a Richard Jefferson alley-oop to tie the game at 82. However, they then made just of one of their next 13 field goal attempts, allowing the Raptors to go on a 12-3 run over the next eight minutes to take control of the game.

Commenting on the team’s third straight loss on the road, LeBron James talked about the mindset the team needs to establish:

“You have to have a bunker mentality on the road,” said James.

Cleveland head coach David Blatt was asked about the fourth-quarter struggles and attributed it to the team’s currently-depleted roster:

“I thought we got tired for obvious reasons, we were very shorthanded,” commented Blatt. “I thought fatigue played a very big part.”

The defeat spoiled strong offensive performances from Kevin Love and James. Love collected another double-double with 21 points and 13 rebounds, while James scored a game-high 24, handed out eight assists and hauled down six rebounds.

Love was also asked about the final quarter:

“We just missed (shots), we had some good looks,” remarked Love. “Bottom line, we have to play more physical.”

Mo Williams, who returned to the court after missing the previous three games, finished the night with 15 points and had the most spectacular basket of the night, when he launched a shot from just beyond the half-court line right before the third quarter ended. The basket swished and chopped the Cavs deficit to a single basket entering the fourth quarter.

Over the course of the game, Cleveland was especially damaged by the Toronto backcourt, which combined for 47 points. In addition, the Raptors dominated in the paint with a 52-28 advantage.

James didn’t attach any special significance to the contest:

“Every game matters,” said James. “I’m not a big fan of saying which games are more important than others.”

That fourth quarter run by Toronto was indicative of the entire evening, with both teams experiencing highs and lows on the offensive side of the ball.

The first half was a virtual rollercoaster that saw both teams going on huge runs, yet both the first and second quarters ended with the teams deadlocked. After 12 minutes, they had each scored 25 points and at the half, it was tied at 49.

The Cavaliers struck first by connecting early on 59 percent of their field goal attempts, using a 10-2 run to take a 23-16 lead. The Raptors answered with a 19-2 run that extended into the second quarter and held a 35-25 advantage. The key statistic for the Cavs in that case was again their ice-cold shooting that saw them connect on just one of 12 field goal attempts.

At that point, Cleveland went on their own 19-2 run to go ahead 44-37, fueled almost exclusively by the three-point shot. All five of their field goals came via the trey, with four free throws added to the mix. That surge was followed by 11 unanswered points by Toronto, but by the time intermission had arrived, things had evened up.

That late cold spell prevented the Cavs from being able to take advantage of poor free throw shooting by the Raptors, who made 12-of-22 on the night.

James was succinct in noting the need for the Cavs to become more aggressive:

“They were more aggressive than us,” commented James. “They’re a good team and they got the win.”

“I think there’s a lot of good teams in the East, unbeknownst to a lot of people,” said Blatt.

Cleveland was without the services of backup point guard Matthew Dellavedova, who missed the game due to a lingering calf injury. Despite Williams getting back in the lineup, it was Jared Cunningham who got that start at the point.

Despite that absence, Blatt refused to say that was the difference in the game:

“No excuses tonight,” remarked Blatt. “We had to do the job with the players we had.”

While acknowledging the absence of Dellavedova, Love wanted to focus on continuing to improve in spite of the wave of injuries:

“We want to be a great enough team that it doesn’t matter,” commented Love. “Missing Delly hurt tonight because they’re a guard-oriented team.”

Next up for the Cavaliers will be a Friday night road matchup against the Charlotte Hornets. That contest tips off just after 7 p.m., and will be followed by a 7:30 p.m. home contest against the Brooklyn Nets on Saturday night.