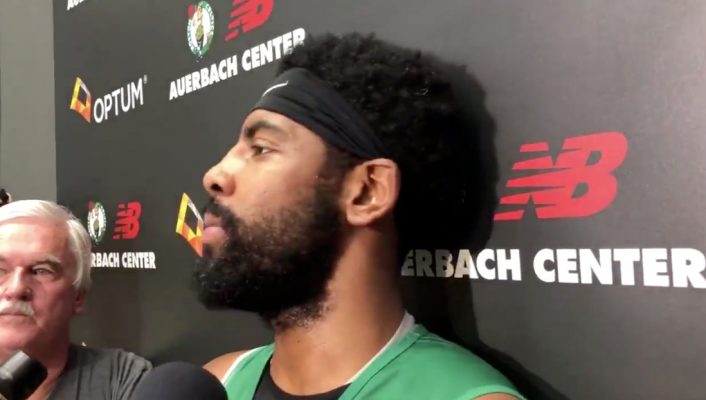 Former Cleveland Cavaliers point guard Kyrie Irving‘s departure from the team was controversial, largely because of his reported frustration in playing in the shadow of the now-gone LeBron James.

Starting his second year as a member of the Boston Celtics, Irving reflected on his role with the Cavaliers as he now seeks to be the leader of his current team.

Kyrie says the Cavs didn’t give him the keys to the franchise. “I was just a great piece. … I was too young, I didn’t deserve them.” pic.twitter.com/gvCP9ZPbzY

Irving was the first overall pick of the 2011 NBA draft and was seen at that time as the cornerstone of the Cavs’ rebuilding efforts following the first departure of James the previous year. During his first three seasons in the league, he struggled at times to lead a Cavaliers team that continued to flounder.

Once James returned in 2014, the further addition of Kevin Love gave the Cavaliers three standout players who would lead the team to a trio of consecutive Finals appearances. The lasting highlight of those trips was the 2016 comeback from a 3-1 deficit in the NBA Finals, punctuated by Irving himself delivering the game-winning 3-pointer in Game 7.

Despite those heroics, James was still seen as the team’s main leader, a status that got to be too much for Irving after he completed his sixth season in 2017. Less than a month after the season ended, he asked the Cavs for a trade, which was finally granted after seven weeks of back-and-forth discussions that included attempts to try to get him to change his mind.

For much of his first season with the Celtics last year, Irving put up solid numbers. However, his injury history once again emerged when he was ruled out of the postseason after undergoing knee surgery. That resulted in him missing the Eastern Conference finals in which the Celtics lost in seven games to the Cavaliers.

Since leaving Cleveland, Irving has taken reported shots at the Cavs’ organization, the coaching staff and even the city itself. These most recent remarks may be an indication that he’s moved on and gained some maturity along the way.