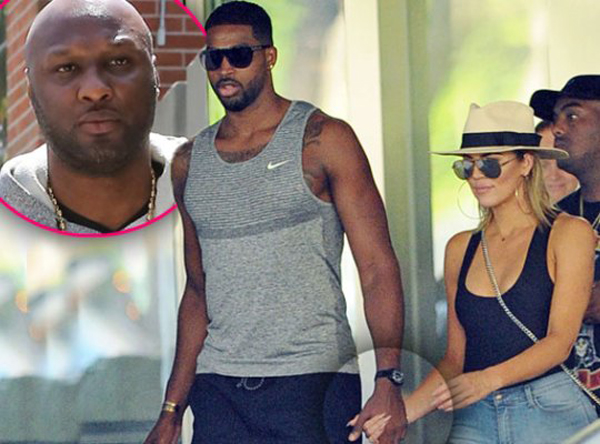 It goes without saying, that it’s very difficult to date a reality TV star these days and expect a perfectly tranquil relationship.

Earlier this month, Kardashian planned for her ex-husband and two-time champion Lamar Odom to meet up with Thompson so everyone could stay on good terms. Unfortunately, that wouldn’t be the case.

According to RadarOnline.com, both big men got into “nasty showdown” upon meeting and had to be separated:

“RadarOnline.come has exclusively learned 32-year-old Khloe Kardashian’s ex-husband Lamar Odom has had a nasty showdown with her current flame Tristan Thompson – and the two men had to be physically separated.

“Khloe arranged for the guys to meet at her home a few weeks ago, because she wants to stay on good terms with Lamar and thought he and Tristan would keep things civilized.”

Despite the genuine attempt by Kardashian, things went south because the two champions couldn’t hold in their pride. According to Radar Online’s source:

“Odom, 37, rocked up with a couple of his buddies in tow and the ill-conceived meeting with Cleveland Cavaliers basketball player Thompson, 25, quickly turned ugly.

“She didn’t count on how snarky and hostile Lamar was going to be, plus how super-protective Tristan acted in return.”

Odom, who nearly died at a brothel two years ago, has been out of the NBA since the 2012-13 season and has had trouble making a comeback. Thompson, on the other hand, is playing a focal part on a championship team that is expected to go to the NBA Finals for a third consecutive year.

It makes sense why fellow teammate LeBron James reportedly wasn’t thrilled to hear about the couple’s relationship. James and Cavs fans can only hope this won’t serve as a hinderance upon the team’s final three months of the season.