Kyrie Irving Says He Has a Return Date in Mind 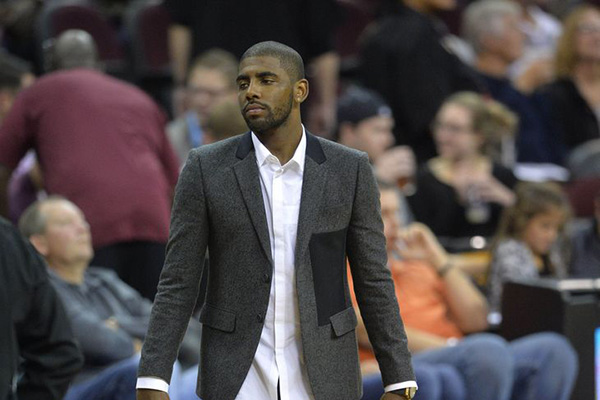 Kyrie Irving has a return date in mind, but don’t expect him to tell anyone.

Irving has been recovering from surgery to repair a fractured kneecap from nearly five months ago and there have been rumors that the All-Star point guard is due back in January or even as early as December. Irving stated he has an exact return date in mind, but he’s not going to share it at the moment, via Dave McMenamin of ESPN.com:

“There’s light at the end of the tunnel. In terms of a date, I do have one in my head, but obviously, I’m not going to share it for a little bit. I think all the rumors that everyone said in terms of a January return or whatever, I’ll let them stay out there. But for me, I’m just trying to take it one day at a time, and I’m just continuing the process.”

Th 23-year-old guard admits it’s been difficult not playing, but stressed the importance of being there for his team:

“It’s been difficult, but for me, it’s just about being there for my teammates. I mean, I think everybody knows by now I’m the biggest supporter of our teammates and one of the leaders on the team, and I’m going to continue to do what’s needed from me as a leader. And that’s continuing to use my voice, be there every single day and be there before everybody gets there until my work is done.”

The fifth-year guard suffered the knee injury during Game 1 of the NBA Finals this past June. He missed the remainder of the series, as the team fell to the Golden State Warriors in six games. Irving spoke of the difficulty of missing most of the NBA Finals series:

“Not being there and not being able to be out there with James and be out there with my teammates, especially at the biggest stage, is something that I’ve dreamt of as a kid and those big stages I thrive on. So it’s a little disheartening, but it was a learning experience, to say the least. Now coming into this season as a fifth-year player, this is my first season where I haven’t come into the season healthy. So it’s been a learning experience from that aspect, but it makes my job a lot easier when I have guys like this.”

We will keep you updated here at Cavaliers Nation in regards to Irving’s timetable on his return from knee surgery.