Don't Miss
Home / Media / LeBron James: ‘The Main Thing Is Still the Main Thing and That’s to Win a Championship’ 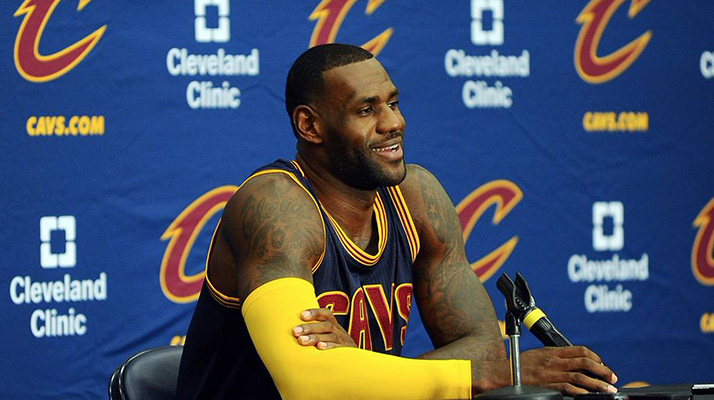 Asked about the difference between last season and the upcoming one:

James was also asked how quickly a successful rhythm can be established:

“It depends. The guys you start the season off with, I think health plays a part, for sure. You have to be healthy no matter what type of run that you’re going through. I think it takes a little bit of time to get in the rhythm. I’m not quite sure when it kind of jump starts.

“You go on the West Coast for a four or five-game stretch, and you’re gone for 10 days, You begin to get a rhythm there,” said James, who added, “Some people say you wait a couple of months, and then the rhythm starts to appear. We’ll see what our team does. We’ll be able to judge how well we come together.”

Asked about the different makeup of the Cleveland roster this season, he offered this:

“The main thing is still the main thing and that’s to win a championship. If you prepare for it, if you visualize it every single day, on and off the floor, it puts your mind in the right frame to win.”

James also praised the work of the Cavalier coaching staff:

“For us, we have a great coaching staff that’s going to put us in the best possible chance every single night to compete. If we can compete, it doesn’t matter what happens on the floor. We’re going to give ourselves the best chance to win every night.”

Asked about his current health and whether he dieted any differently than in the summer of 2014, when he lost a healthy amount of weight, he joked:

“I feel just as healthy as I did in my rookie year,” said James, before quickly countering that by saying, “I could have used a couple more months off. I’m ready to go and I will be on the floor tomorrow at the start of training camp. I’ll start to prepare my body, start to prepare my mind for hopefully a long run at it. I didn’t do anything as crazy as I did last summer. I kept my body in tune and in shape, and I feel pretty good.”

Asked about any message he wanted to deliver to new teammates joining the Cavaliers:

“Every single day we have championship habits. Both on and off the floor, we prepare as champions,” remarked James. “We work toward hoisting that trophy up, and that’s what it’s all about. That’s on and off the floor. We represent this organization at the highest level and you represent yourself at the highest level. I think they know coming here, that’s what we’re preparing for. I’m excited about the guys they’ve brought in.”

When asked how he tried to improve himself over the offseason, he was reluctant to reveal exactly what he did:

“I feel like I improved some aspects of my game. In the month of September, I got a little bit crazy with my workout regimen. I was doing three-a-days, five days a week. So I believe I improved,” said James. “Did I get enough rest? I don’t think so, but I definitely improved and I feel good about where I’m at right now.”

Asked about getting over the loss to Golden State in the NBA Finals:

“I’ve been to the finals six times and lost four of them and they get worse and worse every single time,” said James. Recounting those four losses, he said, “Every year that you lose in the finals, it gets worse and worse to get over.

“I asked myself last year during the postseason, would I rather not even make the playoffs than lose in the finals, and it’s a very valid question to myself. To get all the way there and lose, it’s like, ‘I’d like to have those two months back. I could have been somewhere laying out, having my body get better.’”

Regarding the fact that he’ll be 31 in December and whether he thinks about how much longer he can play:

“No, I don’t, but I do also know that Father Time is undefeated,” said James. “But I definitely don’t think about me not being the best basketball player in the word. It’s been that way for a while, so I kind of got used to it.”

“I know what’s important. I know what the number one thing is, and that’s the game of basketball, so everything comes second after that.”

The final question focused on how James will handle the minutes he plays:

“I think that’s kind of a coach Blatt-myself conversation,” said James. “We haven’t quite gotten there yet. I’m very hard-headed…because I love to play so much. I’m going to be very smart on how minutes I play per game.”