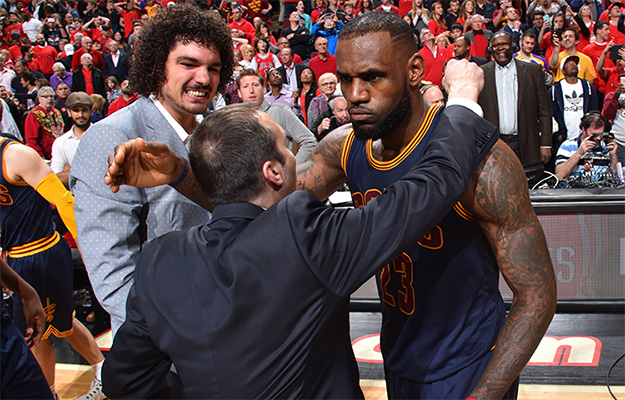 (Chicago, IL) – Turnabout is fair play as the Cleveland Cavaliers tied their Eastern Conference semifinal series against the Chicago Bulls at two games apiece on a buzzer-beater by LeBron James, collecting a dramatic comeback win at the United Center by a final score of 86-84.

After the Bulls’ Derrick Rose tied the score with 9.4 seconds left, James drove to the basket, but the shot was blocked out of bounds with 1.5 seconds left. Originally, the time left was listed as 0.8 remaining, but after officials looked over the video, they changed it to 1.5. James then connected from the right corner to once again deadlock the series.

“I just told Delly (Matthew Dellavedova), get me the ball,” said James. “I’m going to get open. Get me the ball and we’re going to win this game.”

James said after the contest that the original play was for him to inbound the ball, but he changed the play on the sideline, saying that he would take the final shot.

The Cavs led 84-79 with 41 seconds remaining, but a three from Jimmy Butler was followed by an offensive foul on James with 14.3 remaining. Rose then followed with his basket, which led to the heroics of James, who finished with a double-double with 25 points and 14 rebounds, while adding eight assists.

Cavaliers head coach David Blatt said about the comeback, “It speaks volumes about how well we had to and did defend in the game. We didn’t lose our confidence on defense.”

The Cleveland defense deserves the lion’s share of credit for the victory, holding Chicago to just 11 points for all but the final 30 seconds of the fourth quarter.

In that final stanza, the Cavaliers finally began to warm up from beyond the three-point line, connecting on three of six shots. That was a huge improvement from the first three quarters when the Cavs couldn’t buy a basket when it came to three pointers, hitting on just two of 19 attempts.

The Cavs put together a 23-5 run that began after Chicago held a 68-57 advantage with 42.9 seconds left in the third quarter, with the Cavaliers able to get the margin down to seven at 68-61 before the third quarter horn sounded.

Blatt mentioned that late surge as a turning point, saying, “We dug in at the end of the third quarter, and we made two big plays.”

The Cavs then ran off seven more unanswered points at the start of the fourth, tying the game at 68 on J.R. Smith’s three with 9:09 left, taking advantage of three missed shots and a trio of turnovers by the Bulls.

After Chicago briefly took the lead back, Smith answered with another three to then give Cleveland the lead back. James then followed with a running layup to make it 73-70 with 6:40 to go.

Blatt talked about Smith’s contributions, saying, “He’s a money ball shooter. We need him to stretch the floor and take shots.

Jimmy Butler tied things back up just 19 seconds later, but another three from Smith, followed by four more points from Timofey Mozgov boosted the Cavaliers’ advantage to 80-73 with 4:04 left.

Rose tallied five points as the Bulls battled back to make it 82-79 with 1:32 left, but James drilled a pair of free throws with 41 seconds remaining to lay the groundwork for the final drama.

The Cavaliers got off to a fast start at the beginning of the game, jumping out to a 7-2 lead in the first few minutes. They were able to maintain their advantage until just under five minutes remained in the quarter, when Taj Gibson’s dunk gave the Bulls a 14-13 lead.

Over the remainder of the quarter, Chicago pushed their lead up to four points, but the Cavs were able to stay close. James’ driving layup in the closing seconds closed out the scoring in the period, the Bulls holding a 28-26 lead.

Rose and Butler were the main sources of offense for Chicago in the first, scoring nine points apiece. For Cleveland, James matched that output, with the team dishing out six assists. However, that latter number was negated by the six turnovers by the team.

When the second quarter got underway, the Cavaliers briefly knotted the score at 28, only to see the Bulls go on a 9-1 run over the next two minutes. The Cavs’ defense then took over as they ran off 16 unanswered points to switch a 37-29 deficit into a 45-37 lead.

That push began even though Cleveland didn’t have its first field goal of the quarter until under seven minutes were left in the half. Chicago was held scoreless for nearly seven minutes as they missed 13 consecutive field goal attempts.

The Cavaliers saw their lead diminish somewhat by the time halftime rolled around, heading to the locker room with a 49-45 lead.

After connecting on the opening basket of the second half, the Cavs watched the Bulls score 10 of the 12 points to take a 55-53 lead. A Kyrie Irving jumper tied the game at 55, but this time, Cleveland was held without a field goal for more than seven minutes, managing just two Iman Shumpert free throws.

“The kid is a warrior. No one can relate what he’s going through,” said James about Irving, who continues to play with some nagging injuries. “He gave us 40 minutes, and that’s all you can ask.”

With 3:36 left in the third, the collective hearts of Cleveland fans jumped to their throat when James went down after being called for a charge. Holding his ankle in obvious pain, the scare subsided when he returned after a timeout.

Overall, Blatt said the defensive play was the obvious key to the win, “I did think we were more aggressive to the ball. We had to be on top of our game on the defensive end.”

James talked about satisfaction of winning on the road, saying, “To win on a hostile floor, that’s huge.”

The series now shifts back to Cleveland for a Game 5 Tuesday night matchup that will get underway at 7 p.m. ET.