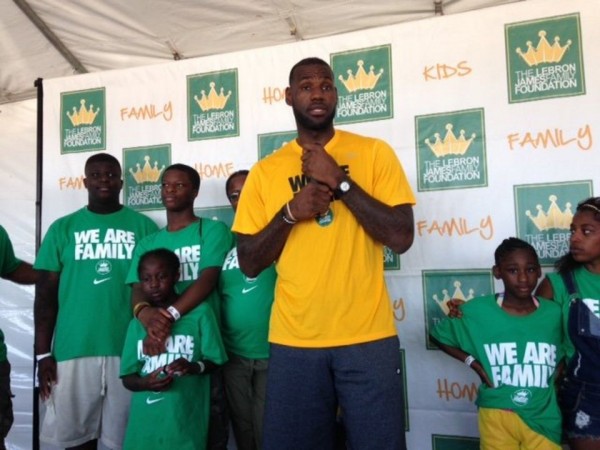 While LeBron James often makes headlines on the court with his play, he has recently made positive headlines off of it.

On Thursday, the Cleveland Cavaliers star announced a partnership with his foundation, the University of Akron and JPMorgan Chase in which any child under James’ mentorship who graduates from Akron Public Schools and satisfies a yet-to-be-determined criteria would receive a free ride to the University of Akron.

LeBron James announced he will provide full college scholarships to children who complete his I Promise program.

The scholarships would be paid for by the university and it would cover tuition and Akron’s general services fee, worth around $9,500 a year.

James made the announcement while at Cedar Point along with University of Akron President Scott Scarborough. The four-time MVP stated how much it means to be giving away these scholarships to inner-city kids:

“It means so much because, as a kid growing up in the inner city and a lot of African-American kids, you don’t really think past high school. You don’t really know your future. You hear high school all the time, and you graduate high school and then you never think past that because either it’s not possible or your family’s not financially stable to even be able to support a kid going to college.”

A few years ago, the James foundation shifted its focus to mentoring and tutoring poor at-risk youths who are in danger of failing out of school.

Scarborough stated the following in regards to James’ involvement with the university:

“What LeBron’s doing is going to have a large impact on these kids’ lives. It’s an easy decision for us, to take this opportunity to work with a hometown hero.”

James has become a legend on the basketball court after winning four MVP awards and two championships all before the age of 30. However, it is clear that making a difference off of the court is just as important to him as what he accomplishes on the court.

The 12-year veteran will look to lead the Cavaliers to their first NBA title as he embarks on his 13th season.