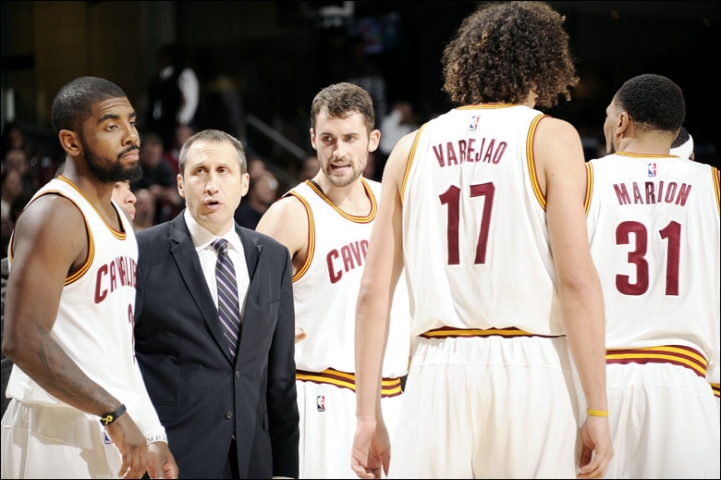 (Cleveland, OH) — Suffering a big letdown after a near-perfect night on Saturday, the Cleveland Cavaliers dropped a 106-97 decision to the Denver Nuggets at Quicken Loans Arena on Monday night.

The victory by the Nuggets, who had lost seven of its last eight games, gained a measure of revenge after they had dropped a 110-101 decision to Cleveland ten days ago in the Mile High City. In that game, Denver’s Ty Lawson sat out due to injury and his backcourt mate, Arron Affalo was held scoreless. In Monday night’s clash, the two combined for 47 points.

The Cavaliers had trailed by just one at the half, then knotted the score at 55 on a Kevin Love three-pointer with 10:36 left in the third quarter. At that point, the Nuggets soon took control of the contest with a 14-5 run over the next four minutes, and eventually took a 10-point lead at 81-71 on Wilson Chandler’s layup with 1:44 left

After Dion Waiters connected on a three with 9:25 to go, Cleveland trailed by only six at 90-84. However, Denver effectively put the game away by putting together a 12-2 run to take a 102-86 with 4:36 remaining. The Cavs would only get within seven points the remainder of the game.

In postgame remarks, LeBron James said about Denver, “They were the more desperate team, and that’s why they walked out of here with a win.” James said defensive problems played a part in the defeat by adding, “We broke down on pick and roll defense countless times.”

Kyrie Irving said afterwards, “I thought we came out with intensity, then took our foot off the gas.”

A tight opening quarter saw neither team hold more than a four-point advantage. The Cavaliers put together a mini-run of 8-2 late in the quarter to take a 26-22 lead, but a Ty Lawson layup with 30.9 seconds remaining closed out scoring in the first 12 minutes.

The two teams would trade leads for much of the remainder of the half until Darrell Arthur’s three-pointer with 20.9 seconds before intermission gave Denver the lead at 53-51. Love then split a pair of free throws in the closing seconds of the first half to send the Cavs to the locker room down by a point.

After the game, Cleveland head coach David Blatt said, “We didn’t do a good job with the ball, and unquestionably that was a big issue in the game.” He also accepted blame for the team’s effort saying, “I didn’t do a good enough job if they didn’t come to play.”

Four Cavaliers scored 20 points or more on the night, with James leading the way with 22. James did not participate in this morning’s shootaround after feeling under the weather. Love collected a double-double with 20 points and 11 rebounds.

Blatt dismissed any connection to James’ health and the end result of the game by saying, “We should have picked it up. That was the job of everyone else.” Instead, Blatt thought the idea of a letdown or looking ahead to their next contest was the problem when he said, “I knew going into this game, that this was a dangerous, dangerous game.”

When asked whether the team realizes that every team will bring their best game to the court, Blatt was blunt when he said, “If they don’t, they better hurry up and figure it out.”

However, the Cavs committed 15 turnovers with James and Irving leading in that dubious category with four apiece. Those 15 turnovers led to 26 points by the Nuggets.

The loss put an end to Cleveland’s four-game winning streak, which ironically began against Denver on November 7. It drops their season record to 5-4 on the year. Meanwhile, the Nuggets won just their third game in 10 contests.

Next up for the Cavs is a home date on Wednesday night against the defending champion San Antonio Spurs, with tipoff set for just after 7 p.m. Eastern. That contest begins a three-games-four-nights situation for Cleveland.

James put Wednesday’s imposing task in perspective by saying, “We have to play with our backs against the wall with every game,” before then adding, “If we’re not focused, they’re going to embarrass us.”