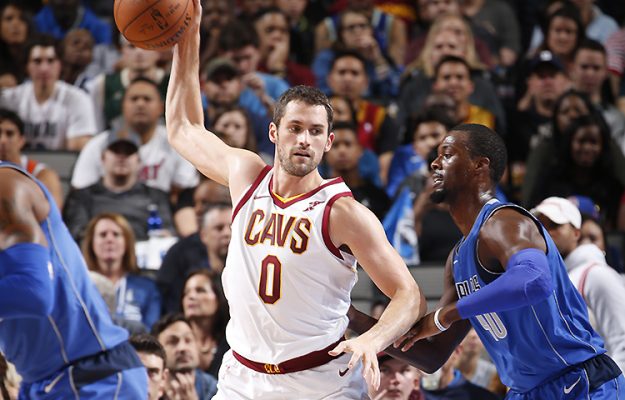 (Dallas, TX) — Kyle Korver‘s 13 points in the fourth quarter helped the Cleveland Cavaliers hold off a spirited comeback bid by the Dallas Mavericks and pick up a 111-104 victory at American Airlines Center on Saturday night. The win improves the Cavs’ season mark to 6-7, while the Mavericks drop to 2-11.

Korver had hit two 3-pointers to give Cleveland a 91-80 lead with 8:12 left in the game, but Dallas came back with 10 unanswered points to make a one-point contest. The Mavericks nearly took the lead with under 40 seconds remaining, but Korver’s rebound and two subsequent free throws gave the Cavaliers a 106-102 lead. A missed layup by the Mavericks then allowed the Cavs to build up enough of a cushion to come away with the win.

“That’s when you want to play,” Korver said afterward about his fourth-quarter heroics. “I’ve always enjoyed playing those minutes and I try to take advantage of it.”

Kevin Love and LeBron James each collected double-doubles on the night for the Cavaliers, with Love notching a game-high 29 points and 15 rebounds and James adding 19 points and 11 boards. Rounding out the double-figure scorers for the Cavs were J.R. Smith with 17 including four 3-pointers, Jae Crowder with 15 and Korver with all of his points coming in that last period.

“We’re resilient, we just needed to get back our mental toughness and come away with the win,” James said.

The Cavaliers reverted to old habits at the outset with a slow start that saw them fall behind 16-6 in the first five minutes of the contest. The momentum soon changed, however, when the Cavs put together an 18-2 run, powered by 13 unanswered points. By the time the quarter had ended, the Cavs held a 29-23 advantage as Love and Smith each contributed 10 points to the Cavaliers’ cause.

“Once we settled down and started executing and getting into our sets, we were able to get the job done,” Cavs head coach Tyronn Lue said during his postgame conference.

Smith’s effort on the night was another indication that he appears to be emerging from his early-season slump, thanks to his decision to go back to simply shooting the ball whenever possible.

“It’s so much easier to play,” Smith said. “It takes a lot of stress off your mind because I was taking some of it (his slump) home with me.”

That momentum then shifted back to Dallas in the second period, primarily due to the combined issues of weak shooting, turnovers and bad defense. The Cavs managed to connect on just 33 percent (5-of-15) of their shots from the field and committed six turnovers, while their defense offered up multiple instances of simply allowing the Mavericks to drive the lane virtually uncontested. The end result was that the Mavericks took a 52-49 lead into intermission

Trailing 58-53 with just under 10 minutes left in the third quarter, the Cavaliers put together a 28-11 run to take their biggest lead of the game at 81-69. The Mavericks were able to get the margin under double-digits, 83-74, by the time the period had ended, with the Cavs’ success during those 12 minutes tied to their holding the Mavs to 33 percent shooting from the field and committing just one turnover.

“They found me all night, especially in the third quarter,” Love said. “So they just kept feeding me the ball.”

The Cavaliers will be back in action on Monday night when they travel to Madison Square Garden to face the New York Knicks, looking to gain a masure of revenge after losing to the Knicks at Quicken Loans Arena on Oct. 29.

“Every win counts,” Lue said when asked about the victory coming against a team that entered the contest with a 2-10 mark. “Even if you’re playing great, you have to respect every team.