Don't Miss
Home / Media / LeBron James: ‘I’m Back and We’re Going to Have a Lot of Fun This Fall’

LeBron James: ‘I’m Back and We’re Going to Have a Lot of Fun This Fall’ 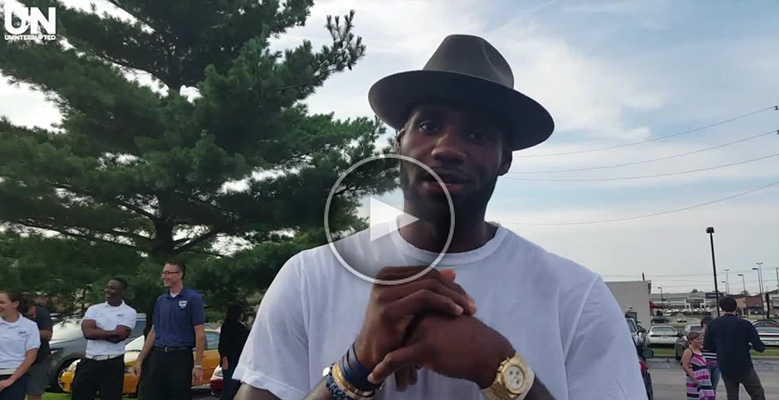 Prior to hosting the Akron premiere of the Judd Apatow-Amy Schumer film, Trainwreck, on Friday night, Cleveland Cavaliers forward LeBron James took time to comment on his recent contract signing and indicate how motivated he was for the 2015-16 season to get going.

The video, which is a part of his “Uninterrupted” series on Bleacher Report, has James speaking directly to the camera for approximately 45 seconds.

He begins by saying, “I just want to let my fans know how truly excited I am about being part of the Cavs franchise again.” James then adds, “I signed my deal today. I can’t wait to get back, all of us to get back: the guys we’re going to bring in, the guys that are going to sign.”

James signed a two-year, $47 million deal that will pay him $23 million this year and give him the option to opt out again after next year. That will definitely be the case next year, considering the fact that the league salary cap will increase to at least $90 million, as opposed to the $70 million for the 2015-16 campaign.

In looking ahead to next season, James said, “We need everybody…our team did so many great things last year, but I’m even more excited about coming on this year, just because of the experience we gained last year.”

Following a 19-20 start, Cleveland quickly coalesced into one of the league’s best teams, eventually reaching the NBA Finals for the second time in their history. They fell in six games to the Golden State Warriors, with James forced to handle the bulk of the offense due to season-ending injuries to both Kevin Love and Kyrie Irving.

James then closed by saying, “Cavs Nation, all in. I’m back, and we’re going to have a lot of fun this fall, going into the spring. Love you all!”