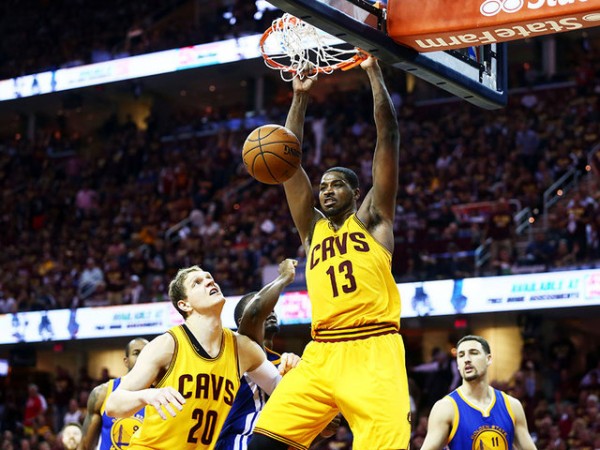 The pending contract negotiations with Cleveland Cavaliers forward Tristan Thompson will be getting underway after the NBA Finals end, but Thompson’s agent has reportedly hinted that the forward be asking for a max deal or close to it.

The news was noted by Cavs beat writer Bob Finnan of the News Herald, who wrote that Thompson’s agent, Rich Paul, “had let it be known” that they would be seeking a much larger deal than had been offered eight months ago

At the start of the regular season, Thompson and his agent turned down the team’s $52 million offer over four years in hopes of the fourth-year forward having a strong year in order to boost his marketability.

That approach worked like a charm, with Thompson having a strong year, becoming a rebounding force. Oddly, his regular season scoring and rebounding totals per game (8.5 and 8.0, respectively) actually dropped from last season.

However, in the playoffs, he’s bumped the rebounding numbers up by an average of two per game, and has had at least 12 rebounds in eight playoff contests, including the first four games of the NBA Finals.

Thompson was forced to trade in his sixth man role in late April when Kevin Love was lost to injury for the remainder of the postseason. His own durability has never been a question, playing in every regular season game for the third year in a row.

There’s really no danger of the Cavaliers losing the services of Thompson, since his restricted status means that any offer from another team can simply be matched by the Cavs.

One certainty, however, will be that the team’s final number will be at least $10 million more than their original negotiation. For comparison’s sake, Thompson’s teammate, Kyrie Irving, signed a max deal last July that was worth $90 million over five years beginning next season.

Thompson won’t get that, since outside of his rebounding, his overall game is still developing. He averaged only 8.5 points this year and remains a questionable enough foul shooter that the Golden State Warriors targeted him in Game 2 of the NBA Finals during their fourth quarter comeback that sent the game into overtime.

Still, his agent is also LeBron James’ agent, so there figures to be no contentious battles ahead. The deal will likely end up remaining for four years; the only difference will be how many more millions per season Thompson will receive.