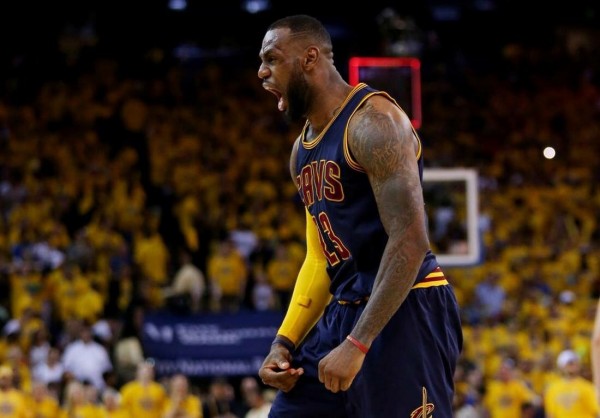 (Oakland, CA) — For the first time in NBA history, the first two games of a Finals series went into overtime. This time at Oracle Arena, the extremely short-handed Cleveland Cavaliers (1-1) held on for an improbable 95-93 overtime win over the Golden State Warriors (1-1) in Game 2 of the 2015 NBA Finals on Sunday night.

LeBron James put on yet another magnificent performance for the ages in the victory, as the two-time NBA champion willed his way towards a triple-double with 39 points (11 of 35 from the field and 14 of 18 from behind the charity stripe), 16 rebounds and 11 assists.

Despite the odds stacked against him and his Cavs teammates, who are without Kevin Love (shoulder) and Kyrie Irving (kneecap) for the rest of the postseason, King James gave it his all and found a way to shock the nation.

“Everything,” said James as he described what this win took. “They gave the ball to me, it was a great team effort.”

The Cavs, who led by as many as 11 points with just over three minutes remaining in the fourth quarter, were then victims of a late 15-4 Warriors run to tie the game at the end of regulation, as James missed a layup before the horn sounded.

Teammates Timofey Mozgov (17 points and 11 rebounds) and J.R. Smith (13 points and four rebounds) were the only other Cleveland players to score in double figures, but the team got the job done.

“I thought we were stronger and fresher at the end of the game,” said Cavs head coach David Blatt in his postgame press conference.

For the Warriors, they struggled with their shooting for a lot of the contest after a very gritty defensive effort from the opposition, especially that of Tristan Thompson (two points and 14 rebounds) in the post and Matthew Dellavedova (nine points, five rebounds and three steals) on 2015 MVP point guard Stephen Curry.

“Obviously he’s a guy who has been counted out his whole life,” said James about his teammate Dellavedova.

Curry, who had a very sluggish performance by his high standards, went just five of 23 from the field, including a dismal two of 15 from behind the arc. The All-Star point guard, who was critical of himself after the game, finished with 19 points, six boards and five assists.

“I don’t expect to shoot like this. I gotta play better,” said Curry. “I’m not going to let one game alter my confidence.”

All-Star shooting guard Klay Thompson led the Warriors in scoring with 34 points (12 of 24 from the field) to go along with five rebounds and two steals, while fowards Harrison Barnes (11 points and six rebounds) and Draymond Green (10 points, 10 rebounds, four blocks and five steals) also scored in double figures for Golden State.

Up next, the Cavs will head home for Game 3 of the NBA Finals at Quicken Loans Arena on Tuesday night. The contest, which is scheduled to tip off shortly after 9 pm ET, will be broadcast nationally on ABC.