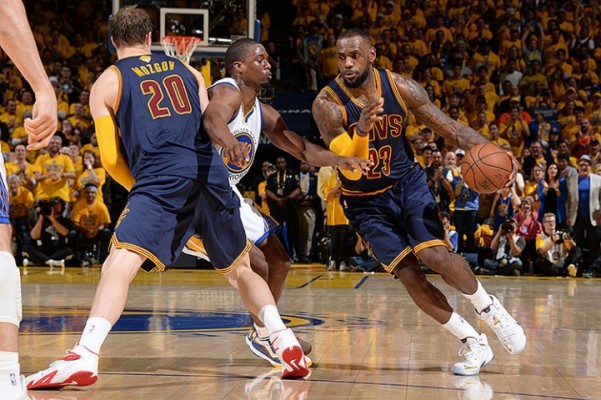 (Oakland, CA) – Going cold in overtime proved deadly to the Cleveland Cavaliers as they dropped a 108-100 decision to the Golden State Warriors in Game 1 of the NBA Finals on Thursday evening at Oracle Arena.

The Cavaliers missed their first eight field goal attempts in the extra session before notching their only points on a layup by LeBron James with 8.9 seconds left.

Cavaliers head coach David Blatt said about the overtime portion of the game, “I thought we came out the regulation flat. Once they got a basket or two, we kind of dropped off the map.”

When asked about fatigue being the reason for the overtime struggles for Cleveland, James said, “Fatigue may have set in, but both teams were fighting and both teams wanted to win real bad.” He added, “They made a couple more plays than we did.”

However, the loss may be even more painful to the Cavs’ championship hopes, since Kyrie Irving again injured his knee and left the court limping after a solid performance that saw him finish with 23 points, seven rebounds, six assists and four steals.

Irving injured the knee early in the overtime session, with the Cavaliers’ trailing, and his absence helped make any comeback effort that much harder. There was no indication during the postgame press conference if he will be able to return for Game 2 on Sunday night or even the remainder of the series, with Blatt saying only that he was being evaluated by doctors, while James indicated that he left the locker room on crutches.

Cleveland had a chance to win the game in regulation after Irving blocked Stephen Curry’s layup attempt with less than 30 seconds left. Curry had a clear path to the basket that would have given the Warriors a two-point lead, but Irving recovered to block the ball against the glass. However, James’ heavily-defended three attempt missed, with Iman Shumpert’s desperation three at the buzzer narrowly missing, bouncing off the rim.

James said about the shots in the closing seconds of regulation, “We put ourselves in position to win, but we just didn’t come through.”

The loss spoiled another outstanding performance by James, who led all scorers with 44 points while grabbing eight rebounds and handing out six assists.

Blatt spoke about James’ performance, saying, “He did attack, play and perform on the biggest stage, and that’s appropriate.” He then added, “We have to do more around him.”

Despite the effort, James dismissed his output, saying, “We have to do better, including myself. I don’t think I was great.”

With the score deadlocked after three quarters at 73, the Warriors twice grabbed a three-point lead before the Cavs charged back with a 9-2 run, led by three baskets from James to take an 86-82 lead with 6:30 to go.

On two more occasions, the Cavaliers held four-point leads, but after Timofey Mozgov’s dunk with 4:17 left made it 93-90, Golden State scored six unanswered points in less than 90 seconds.

James’ three tied it at 96 with 2:38 left in the fourth, but that would be the final field goal for Cleveland until his meaningless final layup in the waning seconds of overtime.

Curry hit a pullup jumper with 53.6 seconds left to make it 98-96, which was followed by a pair of Mozgov free throws with 31.9 seconds to go that set the stage for the near-miss by both teams.

During the first half, it was a tale of two quarters on the boards as the Cavaliers held a commanding 17-9 edge in the first quarter, before the Warriors bounced back by hauling down 15 of the 20 rebounds in quarter number two.

In both cases, the teams were taking advantage of the other’s frigid shooting. In the first, Golden State hit just six of 21 (29 percent) from the field, while the second quarter saw Cleveland miss 12 of its first 15 shot attempts before warming up to end the half.

James scored nine of the Cavs’ first 11 points, but in the first six minutes, there were seven lead changes, with both teams showing the effects of not playing for over a week. A three by the Warriors’ Harrison Barnes gave his team an 11-9 lead, but that served as the spark for the Cavaliers, who went on a 20-4 run over the next five minutes.

J.R. Smith’s second three of the quarter gave the Cavs their biggest lead at 29-15, but the Warriors were able to chop four points off the deficit by the end of the stanza to make it 29-19.

“We did start extremely well. We had a game plan that we followed well, but the NBA game’s a long game. Teams are going to make their runs,” said Blatt. “Still, we were in position to win the game.”

When the second quarter got underway, each team again started cold by missing their first three shots. However, Golden State notched a pair of field goals to whittle the margin to six before a Mozgov dunk stopped the 8-0 run.

The Warriors answered with a pair of baskets by Marreese Speights to reduce the Cleveland lead to four at 31-27 with 7:41 prior to the half. The Cavs were able to get their lead back up to seven, but two baskets and a three by Curry from the left corned knotted the score at 36 with 4:21 to go before intermission.

The Warriors ran off five more unanswered points for a 41-36 advantage, but after struggling from the field for much of the second, each of the next six Cleveland field goal attempts hit. During the latter push, Shumpert hit a pair of threes.

Klay Thompson three then gave the Warriors a 46-41 advantage, the Cavs ran off seven straight points to take the lead back with 33 seconds left.

After Golden State’s Draymond Green tied the game again on a dunk with 10.4 seconds remaining, Smith sent Cleveland to the locker room with a 51-48 halftime lead on a deep three with just 2.2 seconds to go.

While the Warriors’ Thompson tallied the first basket after the break, the Cavaliers scored eight of the next 10 to hold a 59-52 lead with 9:15 left in the third. They were able to maintain the lead for almost all of the quarter.

However after James hit both ends of a pair of free throws to make it 69-64 with 4:28 left in the third, Golden State scored nine of the final 13 points to make it 73-all entering the last quarter, with Andre Iguodala’s layup in the closing seconds tying things up.

Tristan Thompson had another strong game on the rebounding front, collecting 15 rebounds on the night in 47 minutes of action. Ironically, his only two points of the game happened to be the first basket of the contest.

Thompson was asked afterward about the amount of playing time he received, and said, “You just have to be prepared, come out and be productive.”

The Warrior bench dominated in the battle of reserves, outscoring the Cavaliers 34-9. Blatt spoke about that stat by saying, “I think that was a significant factor in terms of the numbers and the lift they got.” In reference to the Cleveland bench, Blatt said simply, “We missed their contributions.”

Veteran James Jones discussed the Cavs’ potentially perilous situation, saying, “We’ve been here before, but we just need to fight and come back.”

Game 2 will also take place at Oracle Arena on Sunday, with tipoff set for just after 8 p.m. ET.