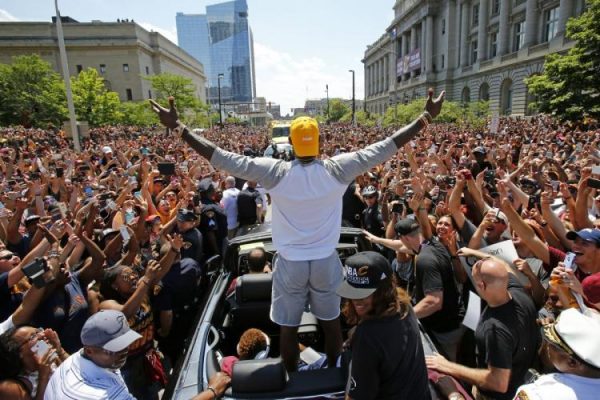 The lasting images of the Cleveland Cavaliers‘ victory parade on June 22 show more than one million people celebrating the franchise’s first-ever title and the first title in Cleveland sports since 1964. However, one photo of a portion of that massive crowd has found its way into the current presidential campaign between Donald Trump and Hillary Clinton.

An avid Trump supporter, Tatiana Wright, used one of the photos from the victory parade and passed it off as a Trump crowd for a rally in Jacksonville, Florida on Wednesday night.

#US: look at #Trump #TrumpRally crowd in #Jacksonville #Florida! This is how #US #Democracy looks like! ?#Tatiana ?? pic.twitter.com/kztcEGAGre

Less than three hours after the photo had been posted by Wright, Cavaliers fan Conrad Kaczmarek pointed out the error.

Pretty sure this is from the Cavs championship parade…??? https://t.co/TNRIBgrofO

Then, 28 minutes later, he posted a screenshot from the Breitbart story with the original photo.

A photo of Trump entering the rally was eventually substituted, with the following correction noted:

“UPDATE: A photograph that was incorrectly attributed on social media to the rally in Jacksonville has been removed.”

Breitbart is a conservative-leaning website that has been previously criticized for its own avid support of Trump, with this mistake the latest ammunition for its critics.

Of course, were the election to suddenly include NBA Finals Most Valuable Player LeBron James among the candidates, Cavs fans would elect him in a landslide. In truth, James has to wait until 2020 to become eligible to run, though he may have to contend with another purported candidate: Kanye West.

There’s no indication that Trump decided to channel J.R. Smith by taking off his shirt for the rally. Right now, his only connection with the Cavaliers is that he was officially nominated in the Cavaliers’ own Quicken Loans Arena.

cleveland cavaliersdonald trumpfeaturedJ.R. Smithlebron jamesnews ticker
← Previous Story NBA Players Vote on Who They Secretly Wish Was on Their Team
Next Story → Kevin Love Roasts Stephen Curry with Simple ‘Like’ on Twitter