Relentless vs. Dirty: Drawing the Line on Matthew Dellavedova 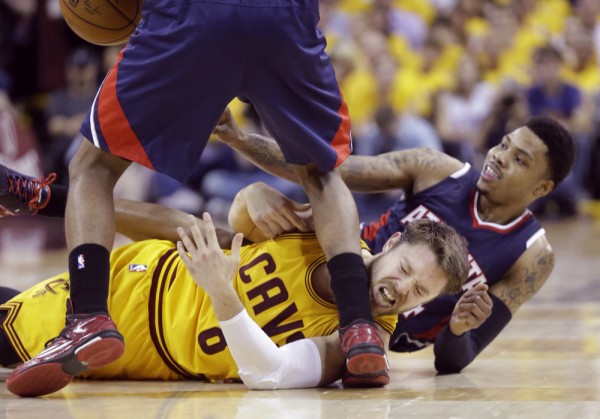 He never could’ve imagined this.

As an undrafted free agent out of Saint Mary’s College competing for a roster spot on a lousy-at-best Cleveland Cavaliers team, Matthew Dellavedova could only have dreamed of playing a huge role on that very same team now headed the NBA Finals.

But through all the ups and downs of his career, from midseason trade rumors to starting at point guard in the Eastern Conference finals, one thing has always defined Dellavedova.

You see, Dellavedova wouldn’t be where he is today, heck, he probably wouldn’t even be on an NBA roster if it wasn’t for the tough, scrappy play that everyone suddenly seems to regard as criminal. We’ve all seen the NBA get softer and shy away from the violence and aggression that once defined it over the past two decades, but is this really what it’s come to?

After Al Horford’s ejection from Game 3, the general consensus seemed to shift toward the “Delly is a dirty player” bandwagon.

“I’m boxing him out,” Dellavedova said of his dust-up with Horford. “He’s pulling my left arm down, I’m trying to stay up and he’s just pulling me down so… I mean… The tape’s there.”


“You can see from the baseline view that he’s pulling my left arm down,” Dellavedova added.

When looking at the replays, you can clearly see Horford’s left hand grabbing Dellavedova’s arm just above his bicep and yanking him to the floor. In addition you can see DeMarre Carroll fall to the floor beneath Delly’s feet, essentially setting up one of those “tabletops”  that we all used to get our friends with at recess.

“You just play the game the right way, you know?” LeBron James said of Dellavedova’s playing style. “At this point, you try to do whatever it takes to win. You don’t want to hurt nobody, no one in our league, I don’t think, he goes around trying to hurt people. But you don’t take the aggressive nature out of the game, you know, and I think in the case of, you know, ever since you’re a kid, the ball on the floor… The first man to the floor usually gets the ball. There’s no difference between what Delly did to Kyle Korver last game and 18 guys diving on the floor late in the game tonight… just no one got hurt. And there’s no difference between me boxing out or Al Horford boxing me out, or Delly boxing out, thats a fundamental box out, that’s all it is.”

But the media seems to be spinning this incident around, referencing Delly’s “track record” as a dirty player to insinuate that he was trying to cut Horford’s legs out from underneath him. It isn’t the first time that Delly has successfully managed to push someone from the opposition over the edge, they say.

The incident that upsets most people was his leg-lock of Chicago’s Taj Gibson, which drew a swift kick from Gibson and resulted in his ejection from the game. That play was as close to dirty as you’ll ever see Dellavedova play, and even then, it’s more gamesmanship than it is playing dirty.

And I’m not even going to dignify the ridiculous notion that Dellavedova was trying to hurt Kyle Korver when diving for a loose ball on the floor in Game 2. Stop it.

“I saw the ball, I dived on the floor,” he said. “If I stay on my belly, it’s going to be a jump ball so I protect the ball and then kick it out to a teammate.”

He just does whatever it takes to show up for his teammates. He always has.

But we have to be able to draw a line somewhere, as the media, as fans of the game. Just because someone is good at getting under an opponent’s skin, that doesn’t make them a dirty player. It makes them a smart player, a grinder, an I’m-gonna-do-whatever-it-takes-to-win player.

People only have a problem with guys like that when they’re on the other team.

Dellavedova is a pest to his opponents, no doubt. But why, all of the sudden, is that such a bad thing?

Bradley Beal named Dellavedova his most difficult defender in a 2014 interview with SLAM magazine. Kyrie Irving had multiple spats with Delly early in his career, some even nearly turning physical, before a mutual respect replaced the disdain that once stood between them.

“Early in the season when you scrimmage more at practice, it definitely almost came to that — having to be separated,” Dellavedova told ESPN’s Dave McMenamin. “But it was never [personal]. We were both just playing hard and wanting to win in practice. It’s been great for my development, having to try to guard Kyrie every day in practice.”

And that’s it, he’s playing hard. In practice, in scrimmages, in off-season workouts, there is no such thing as taking a day off for Matthew Dellavedova, he’s always working.

But there is a distinct line between playing hard and playing dirty, and quite honestly, Delly rarely even skirts that line. He will box out with a vengeance, he will hit the floor for every loose ball — but he would never do anything to try and injure anybody on the court.

I can see how his opponents would find themselves irritated by him and his game, but this attack on Dellavedova’s character as a basketball player seems more like Atlanta’s sour-puss response to getting steamrolled from the outset than it does a legitimate complaint.

But the Hawks aren’t exactly angels themselves. After all, it was Horford who came down with an elbow that prompted TNT’s on-air crew to say, “That’s WWE right there. Somewhere, Hulk Hogan just got off his couch and tore off his shirt.”

And that’s not the only play that the Cavaliers took exception to.

“In game two, when Antic two-hand shoves me out of the air,” James said in reference to the notion that Dellavedova plays dirty. “I mean, the fact that I’m still playing, we don’t talk about it, but he two-hand shoves me in the air, so… what are we really talking about? Are we talking about us trying to win basketball games, or about those guys trying to figure out a way to say, you know, ‘Matthew Dellavedova is this type of player.’”

LeBron made it clear in the postgame press conference after Game 3 that he did not appreciate the narrative surrounding Dellavedova’s play.

“Obviously, I’m a little off about it because this is my guy, this is my teammate,” James said.  “And this is a guy that goes out and works his tail off every single night and, you know, people are trying to give him a bad rap. He doesn’t deserve it and I don’t like it, but I’m not going to get involved in anything that’s outside of basketball.”

James also referenced the “brotherhood” and “NBA family” that exists within the league, but said that you can never remove that aggressive nature from the game, especially during the postseason. At the end of the day, James and the Cavaliers know what they have in Dellavedova and they’re just glad he’s sporting their colors.

Al HorfordAtlanta Hawksdellavedovadellyeditorialfeaturedmatthew dellavedovamramernews tickerpostseason
← Previous Story Why Head Coach David Blatt is in a Lose-Lose Situation
Next Story → Could LeBron James and Dwyane Wade Be Reunited in Cleveland?