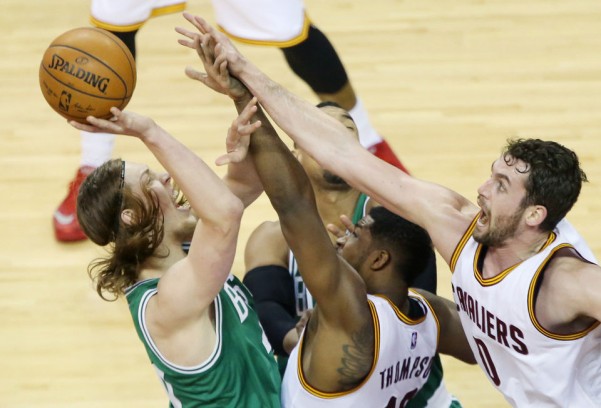 (Boston, MA) — After obtaining a quick 2-0 series lead, the Cleveland Cavaliers (2-0) will hit the road to battle the Boston Celtics (0-2) at TD Garden in Game 3 of round one. Thursday night presents a huge opportunity for the Cavs, as they can hammer a nail in the coffin of the Celtics’ playoff fate with a victory.

The Celtics continue to play the Cavs extremely tough, as Cleveland held off Boston for a 99-91 win on Tuesday night in Game 2. Cavs head coach David Blatt, who was born in Massachusetts and raised as a diehard Celtics fan, knows this year’s Boston team won’t go down without an intense fight.

“Every game sort of builds up the information you gather about the other team, gives you a chance to correct and to make adjustments,” said coach Blatt after practice on Wednesday. “The other side is doing the same thing. Everything becomes more difficult because they know you better and better as well. We know it’s a challenging situation in every case.”

Boston refused to let Cleveland pull away with a large lead in Game 2, despite many electric alley-oops and sharp-shooting from LeBron James (30 points, nine rebounds and seven assists), Kyrie Irving (26 points, six assists and five rebounds), and Kevin Love (13 points, six rebounds and one impressive reverse alley-oop dunk on a pass from James).

“I told J.R. Smith that I felt like Billy Hoyle in White Men Can’t Jump at the end when he caught the lob from Wesley Snipes,” said Love.

However, James admits his play in Game 1 and 2 wasn’t nearly as sharp as it should be for the playoffs.

“I just got to be more conscious about certain passes and certain plays that I’m making,” said James about his turnovers in the playoffs. “That’s 11 for me in the two games (five and a half per game) and that’s not going to cut it. You can make a couple more mistakes at home than you can on the road, so I’ve got to be better with the ball in order for us to be successful.”

Celtics point guard Isaiah Thomas, who continues to be a thorn in the Cavs’ side during the playoffs, scored 22 points for the second straight game and added seven assists off the bench. In order for Boston to have a good chance at defending home court, they’ll need to play suffocating defense and have more players on offense score points in bunches.

“We’ve got to play aggressive and not let those guys do whatever they want,” said Celtics small forward Jae Crowder on Wednesday, who recorded 10 points and five rebounds in each of the first two games. “At the same time, we have to gage it. If we get up against the foul count early in the half, you’ve got to fall back a little bit. Just be smart and aware of the game.”

Game 3, which is scheduled to tip off shortly after 7:00 pm ET on Thursday night, will be broadcast nationally on TNT.