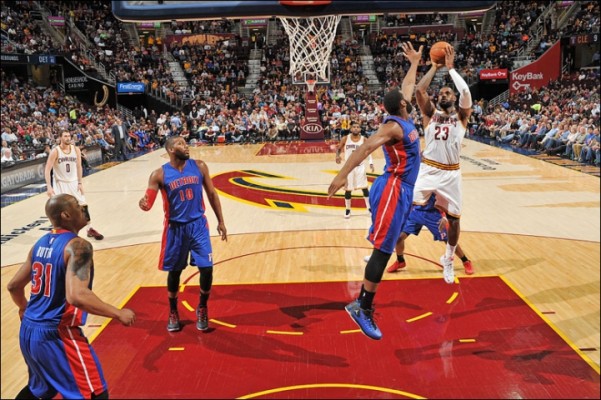 (Cleveland, OH) – Fueled by another triple-double from LeBron James and eight threes from J.R. Smith, the Cleveland Cavaliers got back on winning track by knocking off the Detroit Pistons, 109-97, in home action at Quicken Loans Arena on Monday night.

James finished with 21 points, 10 rebounds and 11 assists, while Smith led all scorers with 28 points, powered by eight treys that mostly came during the middle two quarters. Timofey Mozgov also contributed a double-double with 16 points and 13 rebounds.

After the game, James spoke about what he liked about the team’s effort, saying, “I loved the rhythm on both offense and defense.” He then added, “Also, to be able to have a good flow with my teammates and come out of it unscathed.”

Cavs head coach David Blatt said that even though the win was an easy one, James played 32 minutes because, “We wanted to get him a good burn tonight because we’re a week away from playoff time.”

The Cavaliers’ starting lineup was back together after most of them sat out Sunday’s loss to the Boston Celtics. They wasted little time taking control of the game, jumping out to a commanding 23-5 lead by using 16 unanswered points to blow the game open.

After the Cavs inched the lead up to 20 at 27-7, the Pistons tried to battle back with seven of the next nine points. However, three-pointers by James Jones with 33.9 seconds left and Iman Shumpert with less than a second left boosted the lead to 35-14 after one quarter.

One indication of how dominant Cleveland was could be seen in the fact that they hauled down 15 of the first 16 rebounds of the game.

In the second period, a series of runs for each team made for a wild 12 minutes of action. The Cavaliers tallied eight of the first 11 points to take a 43-17 lead, then took their largest lead of the half at 49-23 after Kyrie Irving’s layup with 7:11 to go before halftime.

At that point, the Pistons charged back with 12 unanswered points over the next four minutes to make it 49-35. After a timeout, the Cavs roared ahead by going on a 13-2 run to close out the half for a 62-37 advantage.

The final nine points in that push came from a trio of threes from Smith, who led all scorers during the first two quarters with 16 points.

However, Irving tweaked his hip during the first half, with Blatt saying that because he was experiencing some tightness in that area, he was held out for the rest of the contest.

As far as playing in Wednesday’s regular season finale, “We’ll have to see how he responds to treatment,” said Blatt.

Smith continued to torch the nets in the third quarter, adding four more threes to give him eight for the game. The only other Cleveland players to score during the period were James with 13 and Mozgov with six, as Detroit got no closer than 19 before the quarter ended with the Cavaliers holding a 93-73 lead.

In the locker room afterwards, Smith was asked if he’d ever had as many open three-point attempts as he’s had during his three months with Cleveland.

“Not even close,” said Smith, who then added that his teammates get mad at him if he doesn’t shoot a three.

The 17 three-pointers the Cavaliers had on the evening gave them a total of 810 on the year. Only eight teams in NBA history have connected for more during a season.

Blatt was impressed by the statistic, noting that, “We have a team that creates three-point attempts for other players. It’s a credit to the guys we have on the team.”

In the final stanza, the Pistons were able to get the margin down to 13 with 5:27 left and 11 with 2:42 remaining, but that would be as close as they got.

Mozgov said in postgame comments, “What I see is all the guys are hungry and want to play, going for every 50-50 ball.”

James commented that one of the goals to winning in the postseason for the Cavs is that, “We have to try to be great.”

Finally, Blatt commented, “We wanted to get a strong, competitive game and we did.”

The Cavaliers close out the regular season on Wednesday night with another home game against the Washington Wizards beginning at 8 p.m.