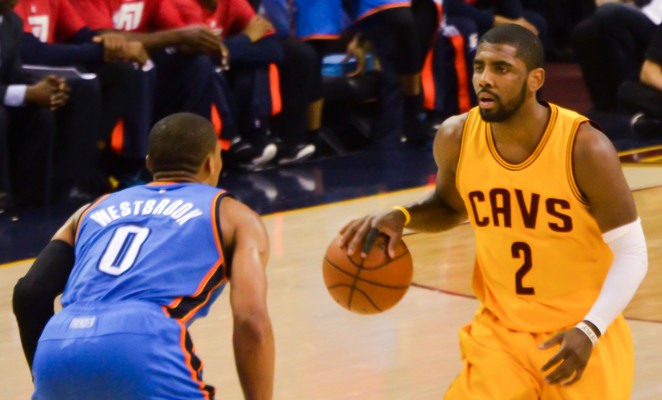 In the space of the last five years, the Cleveland Cavaliers’ Kyrie Irving has gone from avidly-pursued high school recruit to NBA veteran, reaching a number of different milestones along the way.

Irving is now just weeks away from being in position to create a new chapter to his growing legacy, when he competes in his first postseason action ever at either the college or professional level.

Achieving success in this area (as in being part of a Cavaliers’ championship squad), would only be a natural progression for Irving, since he’s pretty much accomplished each goal that he’s set out for himself.

An ESPN.com article in 2012 noted the early portion of these steps, with Irving’s father saying that as a fourth grader, his son wrote down a single goal: to play in the NBA. However, by the time he was a freshman, that wasn’t coming to fruition since Irving was just 5-8, which is almost always the death knell for any NBA hopefuls.

Still, his father continued to encourage him, telling him he’d end up as the top guard in their home state of New Jersey. That eventually came true, as did a growth spurt for Kyrie, who now stands at 6-3, as he led two different high schools to state titles. Performances like that were enough to make him among the most highly sought-after players in the college ranks and put him in the McDonald’s All-American game.

That process eventually led Irving to Duke University, where he was limited to just 11 games in his lone season with the Blue Devils due to a toe injury. However, his talent was such that even in that small sample, he became the top selection in the 2011 NBA Draft. 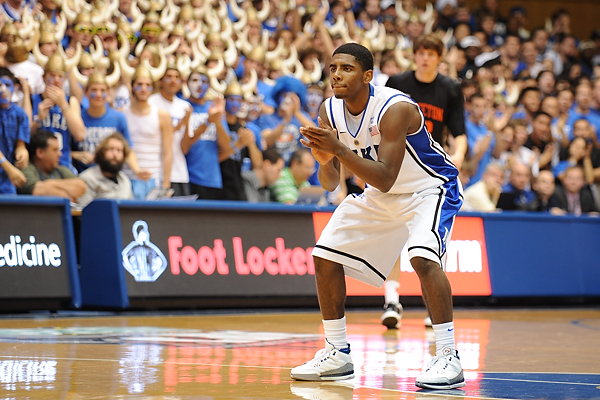 Immediately tabbed as the savior of a Cavalier franchise that had taken a lethal hit with the departure of LeBron James to the Miami Heat, Irving had to wait a few extra months before getting his first taste of the NBA due to a labor lockout.

When Irving did arrive, he quickly showed in 51 games that he could live up to the stature of his lofty selection. However, he was also afflicted with the injury bug that would continue to plague him over the next few seasons.

One indication of Irving’s immediate impact was that he was named Eastern Conference Rookie of the Month in each of the season’s first three months. Not surprisingly, that led to his being crowned NBA Rookie of the Year and also being tabbed on the league’s All-Rookie First Team.

In year two, Irving was limited to 59 games, but still saw his scoring average jump by four points. That was good enough to reach another step on the milestone trail: a berth in the NBA All-Star Game. There, he played just under 25 minutes and tallied 15 points.

During Irving’s third season, he not only played in the All-Star Game, but was selected as the contest’s Most Valuable Player (MVP) after a double-double of 31 points and 14 assists. However, questions about his future with the team developed after a disappointing campaign by the team that once again came up short come playoff time.

That all changed last summer with the return of James and the trade for Kevin Love that shifted talk from simply reaching the postseason to challenging for an NBA championship.

Re-energized, Irving’s durability has rarely been in question this season, since he ranks among the league leaders in minutes played. That statistic pales in comparison to what he’s been able to accomplish when he’s been on the court.

Two 50+ point performances, both of them coming in clutch situations, have given outsiders a chance to see a quality performer excel with a quality team. It has also shown them a player whose defense has advanced enough to keep a number of his fellow point guards in check.

As each piece of Irving’s potential legacy is added to his overall body of work, the overall impression becomes that much more indelible. Succeeding on the biggest stage will put an end to any discussion of the league’s top point guard, especially if the Cavs are able to reach the NBA Finals and face the Golden State Warriors and their standout, Stephen Curry.

However, the playoffs are a different animal entirely, since stumbles along the way or injuries can often be fatal to a team’s title hopes. How Irving performs may help shape the overall perception of him, both in Cleveland and across the country.

One additional area where Irving no doubt wants to make his mark comes next year at the Summer Olympics in Brazil. He wasn’t a part of the 2012 Gold Medal-winning team, which included James, but was the MVP of the Basketball World Cup last summer. Thus, it seems inevitable that he’ll be part of that United States squad that will look for its third straight gold.

Since there hasn’t been a mountain that Irving hasn’t climbed (outside of his brief injury-plagued year in college), it seems inevitable that he’ll one day get a championship ring to wear. Cavalier fans hope that’s sooner than later.