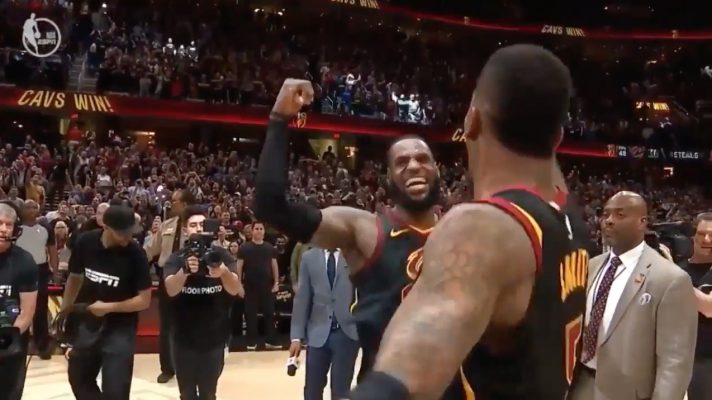 The dramatic game-winning shot by LeBron James helped the Cleveland Cavaliers take a commanding 3-0 lead in their Eastern Conference semifinals against the Toronto Raptors and set off a wild celebration in which teammates mobbed James. One of those teammates was J.R. Smith, who proceeded to engage in a wild dance with James soon after the two players disengaged from their fellow Cavs.

James had another strong performance with 38 points, seven assists and six rebounds on the night. When Smith was acquired by the Cavaliers back in January 2015, his checkered past made the deal open to question. However, James indicated at the time that he’d keep Smith in line, something that’s worked out well, with three trips to the finals and one title helping make the bond between the players stronger.

cleveland cavaliersfeaturedJ.R. Smithlebron jamesnews ticker
← Previous Story Video: Celtics Ask for LeBron After Going Up 3-0 Against Sixers
Next Story → Video: LeBron James and His Son Show Off Secret Handshake After His Game-Winner